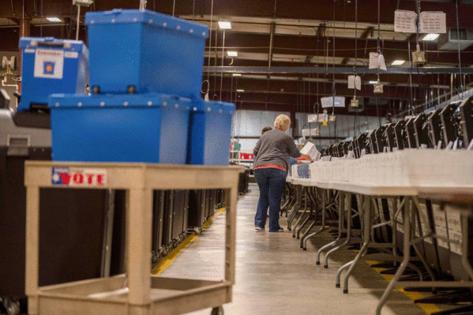 Johnson County had not yet begun counting its ballots Wednesday afternoon.

Mark Gietzen, a Wichita anti-abortion activist, and Melissa Leavitt, a Colby election denier, scraped together around $120,000 Monday to force a partial hand recount of the abortion rights affirming vote.

They chose four of Kansas’ biggest counties — Johnson, Sedgwick, Douglas and Shawnee. They also chose five smaller counties — Crawford, Harvey, Jefferson, Lyon and Thomas. All but Thomas had a majority of voters reject the amendment.

The recount, which began Tuesday and must be finished by Saturday, is virtually guaranteed to fail in changing the outcome of the election. Kansans rejected the amendment 59% to 41%, a gap of more than 165,000 votes.

Gietzen and Leavitt suggested, without evidence, that the recount would uncover evidence of voter fraud or election tampering.

Results so far have changed only marginally from the original count.

By Wednesday afternoon Crawford, Jefferson, Lyon and Thomas counties had finished their recounts.

Lyon County had a one vote switch from no to yes. Thomas County added two additional yes votes that were not recorded because the voter wrote a check mark rather than bubbling in the circles on their ballot. Jefferson County had four fewer yes votes and four fewer no votes.

The remaining counties were making progress on their recounts, Wednesday with Johnson lagging behind. Johnson County has more than 250,000 ballots to count while Sedgwick County has nearly 150,000.

Every other county has less than 70,000 ballots.

A county spokeswoman, however, said in an email the county still expected to finish the recount by Friday afternoon.

By 3 p.m. Wednesday, with 60 election workers counting in bipartisan pairs, Sedgwick County had finished counting ballots from 25 out of 81 Election Day polling locations. The county had not started counting early in-person votes or advance ballots by mail.

County clerks in Harvey and Douglas counties said they expected to complete their work by tomorrow. Shawnee County Clerk Andrew Howell said in an email that he expected the recount to take much of the week but it was going smoothly.