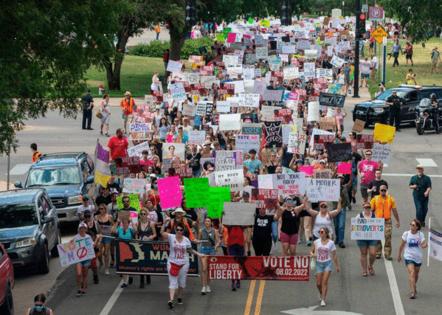 That Friday in June when the Supreme Court overturned Roe v. Wade threw Dr. Sabrina Markese into an emotional tailspin.

She was supposed to go to dinner with her mom and stepfather the next day. But the idea of breaking bread with staunch Catholics who oppose abortion was a bridge too far. She canceled and spent the day in bed.

Most physicians never speak publicly about abortion outside of putting their name on a list of supporters — both for and against.

Markese never thought she’d have to make her private, pro-choice stance known because, well, Roe v. Wade was there.

But now it wasn’t.

So after a day of crying in bed, after nearly 30 years as a family physician in Kansas, a career that began in Wyandotte County, Markese decided it was time to speak her mind publicly, to join the effort to reject an amendment to the state constitution that would have removed the right to abortion.

“I’ve never really been so outspoken as I am now,” said Markese, who lives in Olathe.

Markese thought Tuesday’s vote would be very close. But she was very wrong. Kansans resoundingly, many say shockingly, made it loud and clear that a woman should have the right to choose. The overwhelming voter turnout and lopsided, 59% share of the votes was thanks, in part, to newly minted activists like Markese.

For Markese, the election wasn’t about abortion. It was about her passionate belief in human rights. That patients should be able to make decisions about their own health care. That they should be able to do that in private.