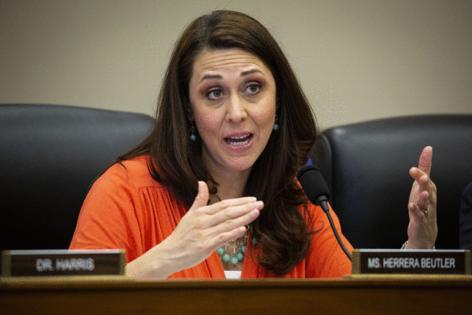 Herrera Beutler, R-Wash., had been in second place since election night, which would secure her a spot on the general election ballot in southwest Washington’s 3rd District.

But Kent, her Trump-endorsed challenger, has surged in later tallies, cutting deeply into Herrera Beutler’s lead and threatening to push her into third place.

Democrat Marie Gluesenkamp Perez remained in first place with about 31% of the vote, leaving her headed for a November matchup against either Kent or Herrera Beutler.

If it remains this close, the race will be subject to a mandatory recount.

Kent’s momentum came in late ballots despite a deluge of more than $4 million in outside PAC spending aimed at rescuing Herrera Beutler. Some of the money fueled ads boosting another Republican challenger and Kent rival, Heidi St. John, who placed fourth in the race.

In central Washington’s 4th District, Newhouse, R-Wash., managed to clear the primary despite joining Herrera Beutler and eight other Republicans in voting to impeach Trump over the Jan. 6., 2021 attack on the U.S. Capitol.

Newhouse was in first place with about 25.5% of the vote, narrowly ahead of Democrat Doug White, at 25.4%. The Seattle Times has called the race for White and Newhouse.

Culp, the former small-town police chief and 2020 gubernatorial candidate, was in third place with 21%, as the anti-Newhouse vote among Republicans was split among six challengers.

County canvassing boards are set to certify results Aug. 16. The statewide results must be certified by the secretary of state by Aug. 19.