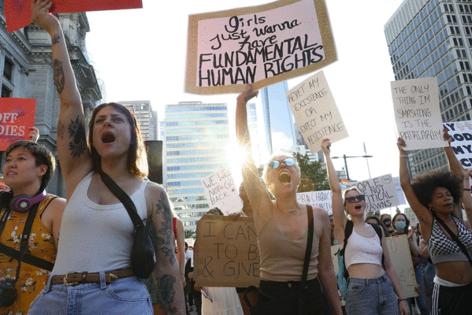 PHILADELPHIA — Pennsylvania Democrats are pointing to this week’s victory for abortion rights in Kansas as a harbinger for the Keystone State, where a similar ballot question could be considered by voters as early as next year.

The proposed constitutional amendment in Kansas that would have eliminated a state constitutional right to the procedure generated unusually strong turnout for an August primary election — and the resounding rejection of it showed that abortion is a motivating issue, even in deep-red Kansas.

And activists said it was an affirmation of public polling that has long showed a majority of Americans favor some abortion regulations but, when faced with the potential for blanket restrictions, have opinions more complicated than party affiliation might suggest.

“It really just proved what we have already known,” said Lindsey Mauldin, director of coordinated programs at Planned Parenthood’s political arm in Pennsylvania. “We hope this will motivate extremists in the legislature to think twice about trying a similar amendment here.”

Kansas was the first electoral test of abortion as a major issue since the U.S. Supreme Court in June overturned Roe v. Wade, and Democrats have cast the outcome as an indication that antiabortion Republicans are out of step with the electorate. They are aiming to sustain the energy around abortion rights through the midterm elections in November, when the political and economic environment is expected to favor the GOP.

The results in Kansas may be even more illuminating for Pennsylvania, one of a half-dozen states where abortion-related ballot measures are pending. The electorate in the Sunflower State is much more conservative, with nearly twice as many registered Republicans than Democrats. In the swing state of Pennsylvania, party affiliation is more evenly split.

It is far from a perfect comparison, though, and Republicans in Harrisburg have showed no signs of backing away from legislation that would amend the state constitution to explicitly say that there is no right to abortion or to taxpayer funding for abortion care.

The proposed amendment, which cannot be vetoed, passed the General Assembly last month largely along party lines. It must be approved in the next consecutive legislative session before a ballot question can go to voters.

How does Kansas’ failed amendment compare with the proposed one in Pa.?

Its text is almost identical to the amendment that was proposed in Kansas. But the effects would be different.