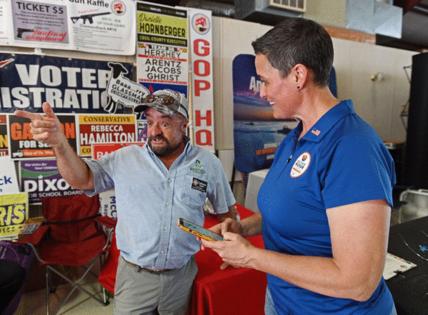 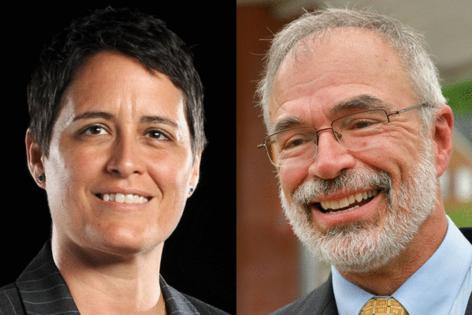 BALTIMORE — The Democratic congressional challenger walked up to the Republican candidates’ booth at the Cecil County Fair, smiled and introduced herself.

There, in a display hall surrounded by funnel cakes, corn dogs and tractors, she talked with a county Republican official about her platform of trying to bridge partisan political differences. Behind the booth hung banners with “GOP HQ” in red lettering, a gun raffle promotion and colorful signs for various Republican candidates, including U.S. Rep. Andy Harris, her opponent in the November election.

“I’m running a campaign that isn’t about whether we are Republicans or Democrats. It’s about solving problems,” Mizeur, who has been endorsed by national progressive groups, told the official. “If I had my way, we would get rid of the political parties. George Washington suggested that we never even have political parties.”

Mizeur (pronounced Miz-EER), a former state delegate and 2014 gubernatorial candidate, is leaning hard on that pitch. Five years after starting a nonprofit focused on overcoming political divisions, her nonpartisanship theme is a staple — an arguably necessary one — in her uphill effort to unseat Harris, 65, in the Republican-oriented 1st Congressional District. It covers the Eastern Shore, Harford County and a piece of Baltimore County.

Mizeur, 49, says she got into the race because of the recent actions of Harris, a sixth-term conservative loyal to former Republican President Donald Trump. She was living with her wife, Deborah, on their Kent County herb and chicken farm, when she heard Harris was among 147 lawmakers who opposed formal certification of President Joe Biden’s Electoral College win as Congress met on Jan. 6, 2021.

From that impetus to get into the race to the revelation last month that Harris was among nearly a dozen Republican members of Congress who gathered with Trump in December 2020 and discussed having Vice President Mike Pence reject the results of the presidential election, Mizeur has sought to remind voters of her opponent’s Trump ties and put them in the context of the violent Jan. 6 attack on the Capitol by other Trump supporters.

Even before she won the July 19 Democratic primary, her campaign seized on evidence from a House committee’s July 12 hearing about Harris’ attendance at the White House meeting. Within two days, she introduced a digital ad with a photo of Harris and a video of the Capitol mob.

Harris, for his part, said he didn’t watch the July 12 proceedings because he “was busy working on important issues like bringing down the price of gas and groceries and securing our communities against violent crime.”

Harris did not respond to Baltimore Sun requests for an interview for this article. Since running unopposed in the GOP primary, Harris has posted Facebook photos of himself after attending a string of county fairs, including in Cecil and Somerset, and other events in which he appears with and touts GOP candidates for local offices. Harris was quoted Monday in a state Republican Party news release saying “the stakes are high in this upcoming election,” that parents need a strong voice in their children’s educations, and police “need our support and not our condemnation.”