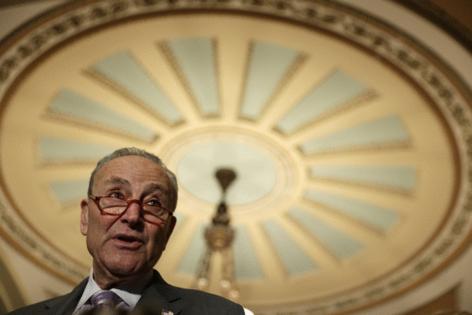 WASHINGTON — Sen. Kyrsten Sinema, D-Ariz., announced late Thursday night that she is willing to “move forward” on Democrats’ tax, climate and health package after leaders agreed to drop a provision modifying the taxation of "carried interest" and make other tweaks to "protect advanced manufacturing and boost our clean energy economy."

With those changes, Sinema said in a statement she would vote to proceed to the bill "subject to the Parliamentarian's review."

Senate Majority Leader Charles E. Schumer, D-N.Y., said earlier Thursday that he expects to call a vote on the motion to proceed Saturday afternoon, which would then trigger up to 20 hours of debate on the measure before a “vote-a-rama” in which senators can offer unlimited amendments before final passage.

Within minutes of Sinema announcing the agreement, Schumer issued a statement confirming it.

“I am pleased to report that we have reached an agreement on the Inflation Reduction Act that I believe will receive the support of the entire Senate Democratic conference,” the majority leader said, using the bill's new nickname Democrats have given it. “I have had many productive discussions with members of our conference over the past three days and we have addressed a number of important issues they have raised.”

Schumer’s statement did not detail the changes that would be made to the bill but he said the “final version” would be introduced Saturday.

The major components of the legislation, “including reducing prescription drug costs, fighting climate change, closing tax loopholes exploited by big corporations and the wealthy,” will remain, and the bill will still reduce the deficit by $300 billion, he said.

The carried interest provision that Sinema successfully removed from the bill would have lengthened the holding period for investment fund managers’ share of their clients' capital gains required to benefit from more generous tax treatment. The provision was estimated to $13 billion over 10 years.

Changes to secure Sinema's backing also appear to include softening the proposed 15 percent corporate minimum tax. Republicans and business groups had raised alarms that the tax would otherwise disproportionately impact manufacturers who rely heavily on accelerated depreciation, or faster writeoffs of equipment purchases.

National Association of Manufacturers President and CEO Jay Timmons said in a statement that he was glad to hear Democrats' agreement would exempt accelerated depreciation from the minimum tax.

"We remain skeptical and will be reviewing the revised legislation carefully," he said. "We cannot afford to undermine manufacturing competitiveness."

To make up for the lost revenue, Democrats have agreed to add a 1% excise tax on stock buybacks, according to two people familiar with the agreement. That provision had been included in earlier iterations of the bill, including the version the House passed last November.

Sinema said she’s willing to consider legislation changing the taxation of carried interest and would work with Sen. Mark Warner, D-Va., a centrist Finance panel member, on it after the budget reconciliation measure advances.

“Following this effort, I look forward to working with Senator Warner to enact carried interest tax reforms, protecting investments in America's economy and encouraging continued growth while closing the most egregious loopholes that some abuse to avoid paying taxes,” she said.

It’s not clear how such a measure would become law outside of the reconciliation process, since Republicans have shown zero interest in changing the provision in the many years Democrats have pushed to end the carried interest “loophole.”

(Laura Weiss contributed to this report.)

Former President Donald Trump’s 2016 presidential campaign has released former staffers from key sections of a nondisclosure agreement, freeing them to talk about their experience — good or bad.

The move was disclosed...Read More

Congress is on the verge of passing historic drug pricing legislation that would allow the government to restrict prices for drugs covered by Medicare, but experts disagree on whether drugmakers will shift those costs to ...Read More

"I have not given it a thought," Omar, D-Minn., said in June when asked about the state of the primary race, going on to ...Read More

It’s been a bad week for former President Donald Trump, who on Wednesday morning found himself in the hot seat pleading the Fifth as he finally sat down for questioning in the New York attorney general’s long-running ...Read More

WASHINGTON — As political reaction reached a boil over the FBI’s search of former President Donald Trump’s Mar-a-Lago estate, Mitch McConnell was standing in Eastern Kentucky attending to the aftermath of calamitous ...Read More