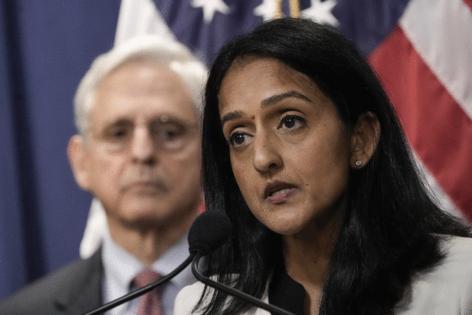 The U.S. Department of Justice’s lawsuit against the state of Idaho — the first such lawsuit the federal government has filed against a state in the wake of the overturning of Roe v. Wade — is based on important matters of life and death, and raises legitimate questions about how Idaho’s abortion ban would be implemented.

In essence, the DOJ lawsuit contends that Idaho’s trigger law is a violation of the federal Emergency Medical Treatment and Labor Act because it “preemptively criminalizes all abortions … even where a denial of care will likely result in the death of the patient,” U.S. Associate Attorney General Vanita Gupta said during a news conference Tuesday.

The medical community for the past several weeks has been raising these alarms over Idaho’s abortion ban.

The arguments presented by the DOJ bring up valid points that would be well-suited for debate in a court of law.

Unfortunately, Idaho’s politicians responded to the lawsuit not with their own cogent legal arguments and reasoning, but with mumbo jumbo about state sovereignty, “federal meddling” and claims that the lawsuit is “politically motivated,” in the words of Idaho Attorney General Lawrence Wasden, who said he wished the DOJ would just sit down and talk about it first.

To the contrary, it was Idaho politicians’ response that appeared to be politically motivated, while the Department of Justice seemed to be the adult in the room, informing Idaho that it thinks it’s breaking the rules.

Idaho doesn’t exactly have a good track record when it comes to these kinds of lawsuits. The state was just ordered to pay $320,000 in legal bills for the plaintiff in a lawsuit over yet another bad law passed by the Republican-dominated Legislature, this one on transgender birth certificates.

Gov. Brad Little’s response to being sued by the federal government veered into the absurd.

“The U.S. Justice Department’s interference with Idaho’s pro-life law is another example of Biden overreaching yet again while he continues to ignore issues that really should demand his attention — like crushing inflation and the open border with Mexico,” according to Little’s press release.

By using a press release in this case to make some vapid campaign statement, it shows Little to be the one acting out of political motivation.

Meanwhile, Raul Labrador, the Republican nominee to replace Wasden as attorney general, offered his own weak response, an ominous harbinger of what we can expect if he’s elected — a lawyer who isn’t keen on making a legal argument, but will play politics as much as possible.

“In filing this lawsuit, the Biden Administration seeks to replace the will of Idaho’s citizens with President Biden’s pro-abortion priorities,” he wrote in a statement.

No, it doesn’t. First, this wasn’t a voter initiative passed by Idaho’s citizens. Second, the lawsuit seeks to protect medical providers from being thrown in jail by the state of Idaho for providing necessary medical care to their patients.

If this is the best defense that Idaho’s got in response to valid legal claims about Idaho’s extreme abortion ban, we’re in trouble.