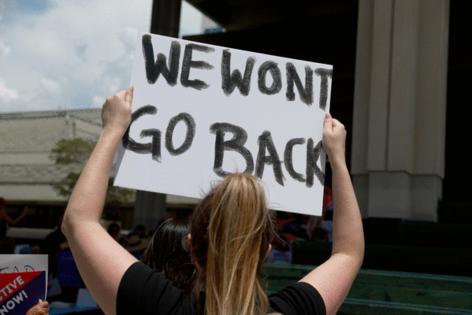 A new ban on abortion has come to a post-Roe v. Wade Florida. Sort of.

Earlier this year, Gov. Ron DeSantis signed a bill into law banning most abortions after 15 weeks of pregnancy. That bill is poised to take effect Friday, just days after the Supreme Court ruled abortion regulation would be left up to individual states.

However, on Thursday, a state judge said he would soon write a temporary order putting the new law on hold.

It’s a confusing situation. But what is clear is that a 15-week ban on abortion would be historic for the Sunshine State. And its passage could portend further bans.

Here’s what to know about the new ban, the legal wrangling and the state of abortion in Florida.

When during a pregnancy is abortion legal in Florida?

State law used to allow abortion until the third trimester, about 24 weeks of pregnancy. That is around the time when a baby begins to become viable outside the womb. Third-trimester abortions were also allowed in cases in which the pregnant person’s life could be at risk, or in which the pregnant person risked “irreversible physical impairment of a major bodily function.”

That would change under a 15-week abortion ban.

Starting Friday, until the courts officially intervene, Florida will have in place its strictest abortion restriction in half a century. Most abortions will only be legal if performed in the first 15 weeks of pregnancy. The new law includes exceptions for people whose health is threatened by the pregnancy or if their baby has a “fatal fetal abnormality.” Florida’s law was based on the Mississippi law that the court upheld when it struck down Roe.

Will the new law allow a pregnancy to be terminated for medical reasons, to prevent the patient from suffering fatal complications? What if it is a nonviable pregnancy?