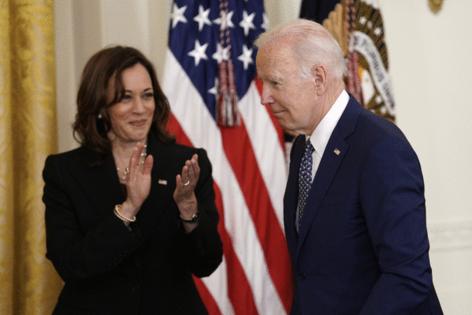 “The president intends to run and if he does, I will be his ticket mate. We will run together,” Harris told a Times reporter Wednesday as she prepared to depart for California aboard Air Force Two.

Advisors had told the reporter that Harris wanted to come to the back of the plane to clarify what she told CNN on Monday. In an interview with CNN’s Dana Bash, Harris was asked about speculation that Biden would not run and about her own potential candidacy.

“Joe Biden is running for reelection, and I will be his ticket mate,” Harris told CNN. “Full stop.”

The deliberate clarification on Wednesday is certain to raise questions about Biden’s intentions, which have been the subject of speculation since the 2020 election. Biden, 79, is the oldest president in American history.

A prominent Democrat who is close to the White House said Harris’ comments Wednesday were not an indication that Biden’s thinking has changed about seeking reelection. Biden and other White House officials have said repeatedly that he expects to run in 2024.

Harris’ follow-up statement was intended to avoid using “trigger words” that would set off requirements for Biden to establish a formal campaign with the Federal Election Commission and begin fundraising, said the Democrat, who requested anonymity to convey internal discussions.

Still, many Democrats have speculated privately about Biden’s future and whether Harris, who has low public approval ratings, is still the favorite to lead the ticket if Biden declines to run. Harris’ equivocation over Biden’s intentions — two days after her initial comments to CNN — is likely to add to that speculation.