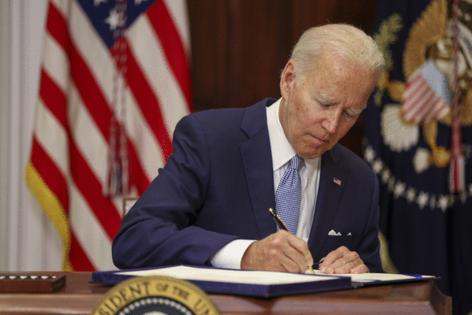 The gun safety bill that President Joe Biden signed into law Saturday is a welcome if measured improvement in public safety and a vivid reminder of what Washington can accomplish when the public good prevails over partisan politics. The deal was too little for many Democrats and too much for most Republicans, but that’s what made the compromise possible, ending nearly three decades of federal inaction on gun violence.

The Democratic-led House approved the legislation Friday on a mostly party-line 234-193 vote, only one day after the Senate approved the bill by a bipartisan 65-33 margin, with 15 Republicans joining all Democrats in support. Supporters were right to use the public outcry over the recent mass shootings in New York and Texas as an impetus to act. While previous attempts to move gun safety legislation failed in the aftermath of high-profile shootings, Senate Democratic and Republican negotiators focused on what was possible, not what was ideal for either side in the gun rights debate. The outcome is a law that will make Americans safer while both building on these reforms and protecting gun rights.

The measure provides funding incentives for states to adopt so-called red flag laws that allow authorities to temporarily confiscate the weapons of those deemed a threat to themselves or others. (Florida enacted a red flag law after the mass school shooting in Parkland in 2018.) For the first time, people convicted of domestic abuse who are current or former romantic partners of the victim would be prohibited from acquiring firearms, closing the so-called “boyfriend loophole” that’s often a factor in gun-related tragedies.

The law makes the juvenile records of people age 18 to 20 available during required federal background checks when they attempt to buy guns. Those examinations, currently limited to three days, would last up to 10 days to give federal and local officials time for a thorough search. The measure expands the use of background checks through federally licensed gun dealers, toughens penalties for gun trafficking and provides billions of dollars for community and school mental health programs and campus safety initiatives.

Senate Minority Leader Mitch McConnell gave his Republican negotiators the room and political cover to maneuver, and Democrats faced reality by not insisting on deal-killing changes, like banning assault weapons and the sale of large-capacity magazines. While the measure is not ideal, it’s progress to build on, and the reforms will get some guns out of dangerous hands in critical moments.

The compromise shows that Congress can succeed when both parties put the public’s interest first. In that sense, it’s disappointing that Florida’s two senators, Marco Rubio and Rick Scott, chose here to be part of the problem instead of the solution. After all, then-Gov. Scott signed some of these very provisions into Florida law after the Parkland school massacre.

But this was a victory nonetheless for public safety, for civic activism and for the cause of bipartisan negotiation. Now governors need to use the resources this legislation provides to make our communities safer.

Editorials are the institutional voice of the Tampa Bay Times. The members of the Editorial Board are Editor of Editorials Graham Brink, Sherri Day, Sebastian Dortch, John Hill, Jim Verhulst and Chairman Paul Tash. Follow @TBTimes_Opinion on Twitter for more opinion news.