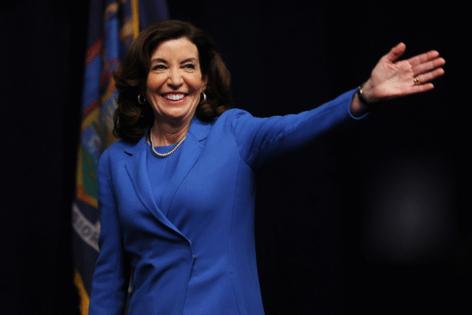 Highlights of races involving vulnerable incumbents or open seats are below. This report will be updated.

O’Dea beats Hanks for Senate nod: Construction company owner Joe O’Dea won the Republican primary to challenge Democratic Sen. Michael Bennet in November. O’Dea was leading state Rep. Ron Hanks 57% to 43% when The Associated Press called the race at 7:35 p.m. Mountain time. Inside Elections with Nathan L. Gonzales rates the November race Solid Democratic, but National Republicans think it could be competitive in a climate that favors Republicans, and their hopes of winning the seat increase with the more moderate O’Dea as the nominee.

Boebert brushes off challenge: Lightning rod GOP Rep. Lauren Boebert survived a primary in the 3rd District against state Sen. Don Coram, who touted his ability to work across party lines. Boebert had 64% to Coram’s 36% when the AP called the race at 7:36 p.m. Mountain time.

Lamborn renominated: Rep. Doug Lamborn defeated three Republican primary challengers to retain his 5th District seat. Lamborn had 50% of the vote when The Associated Press called the race at 7:52 p.m. Mountain time. State Rep. Dave Williams was in second with 31%.

Guest stages big comeback: After finishing second in the June 7 Republican primary, Rep. Michael Guest came back in a runoff to beat a challenger who questioned his conservative credentials and commitment to former President Donald Trump. Guest, a former prosecutor who describes himself as a “conservative Christian leader,” had 66% of the vote in the 3rd District when The Associated Press called the race at 8:46 p.m. Eastern time. Navy veteran Michael Cassidy, who had attacked Guest for his vote for an independent commission to investigate the Jan. 6, 2021, attack on the Capitol, got 34%. Guest benefited from a surge of support from his colleagues in Washington after he finished almost 300 votes behind Cassidy in the primary.

Ethics charges catch up with Palazzo: GOP Rep Steven Palazzo lost his seat in a runoff against a challenger who attacked him for alleged ethical lapses and for “no-show” representation in Washington. Palazzo had 47% of the vote to 53% for Jackson County Sheriff Mike Ezell when The Associated Press called the race at 8:55 Eastern time. Palazzo had finished first in the seven-way primary on June 7 with 32% of the vote. But Ezell, who had 25%, was endorsed by the remaining challengers. The House Ethics Committee is reviewing allegations Palazzo spent campaign money on personal expenses, asked official staff to perform personal and campaign-related tasks, and misused his position to boost his brother’s Naval career.

Suozzi loses bid for governor: Democratic Rep. Tom Suozzi finished third in his run for the Democratic nomination for governor. He had 12% of the vote, to Gov. Kathy Hochul’s 65% and New York City Public Advocate Jumaane Williams’ 22% when The Associated Press called the race at 9:25 p.m. Eastern time.

MINNEAPOLIS — Don Samuels is waging his Democratic congressional primary battle against nationally known U.S. Rep. Ilhan Omar with the hope that Minneapolis voters will reject her campaign like they did last year's ...Read More

Inflation is accelerating at the fastest pace ...Read More