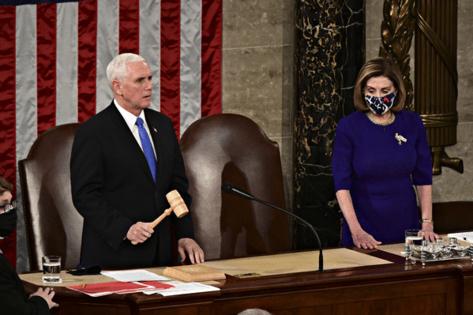 The extreme right reportedly may create chaos through pet poll workers at various precincts in swing states in 2024. The state legislature would then rely on the chaos to use the “independent state legislature doctrine” to reject the votes of the state’s citizens and make its own slate of presidential electors.

The theory, which holds that a state legislature’s action cannot be overturned by the state’s judiciary, rests on this language in the Constitution:

“Each State shall appoint, in such Manner as the Legislature thereof may direct, a Number of Electors, equal to the whole Number of Senators and Representatives to which the State may be entitled in the Congress.”

But it's not simple.

“(I)n choosing the President, the votes shall be taken by states, the representation from each state having one vote ... and a majority of all the states shall be necessary to a choice.”

The single votes of the party that controls the delegations of 26 states would thus select the president.

The independent state legislature doctrine has never been tested in the Supreme Court, but it may happen following the 2024 election. Other provisions of the Constitution presumably would be considered, such as the guarantee to every state of a republican form of government, the oath to support the Constitution that state officials must give, and the supremacy of the Constitution and federal laws protecting civil rights.

But the historically ignored Section 2 of the 14th Amendment to the Constitution, adopted in 1868, should cause state legislatures not to try the doctrine. Section 2 states:

“Representatives shall be apportioned among the several States according to their respective numbers, counting the whole number of persons in each state. ... But when the right to vote at any election for the choice of electors for President ... is denied to any of the male inhabitants of such State, being twenty-one years of age, and citizens of the United States, or in any way abridged, except for participation in rebellion, or other crime, the basis of representation therein shall be reduced in the proportion which the number of such male citizens shall bear to the whole number of male citizens twenty-one years of age in such State.”