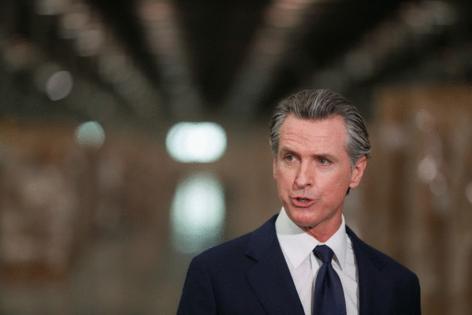 LOS ANGELES — As his wife stood behind him and held back tears, Gov. Gavin Newsom on Friday called the Supreme Court decision to overturn Roe v. Wade sickening and beckoned women in other states to California, their “sanctuary” for free abortion care.

In Texas, where performing an abortion will soon be a felony, Gov. Greg Abbott celebrated the ruling and promised he will “always fight to save every child from the ravages of abortion.”

The disparate responses from the governors of the two most populous states in the nation highlighted the stark political divide in America, deepened by radically different approaches to health care, gun control, the COVID-19 pandemic, LGBTQ rights, immigration and now, once again, reproductive rights.

“This is a serious moment in American history,” Newsom said. “This great divergence: Red states versus blue states.”

Newsom clearly embraces his rise as a dominant, resonating voice for Democratic states nationwide and as a foil of governors such as Abbott and Ron DeSantis of Florida, whom he condemns as disciples of the hard-right, Donald Trump wing of the Republican Party. This month, Newsom joined Trump’s fledgling social media network, Truth Social, he said, to call out “Republican lies.”

While launching his own offensive, Newsom also has criticized the national Democratic Party for failing to step up to the fight with conservatives.

The governor joined with Govs. Kate Brown of Oregon and Jay Inslee of Washington on Friday in announcing a multistate commitment to defend access to reproductive health services and contraceptives. The states vowed to protect patients from GOP states that have threatened to ban their residents from seeking abortions elsewhere in response to the high court ruling.

“I want folks to know around the rest of the country, many parts of the globe, that I hope we’re your antidote to your fear, or anxiety, perhaps to the cynicism that many of you are feeling about the fate and future,” Newsom said.

The Supreme Court ruled that the Constitution does not protect the right to abortion, leaving that decision up to states.

Twenty states, mostly along the West Coast and in the Northeast and mid-Atlantic states, have policies designed to protect the right to end a pregnancy. Another 20, primarily in the South and the interior West, are moving quickly to ban or severely restrict that right. In the remaining 10 states, abortion remains hotly contested.