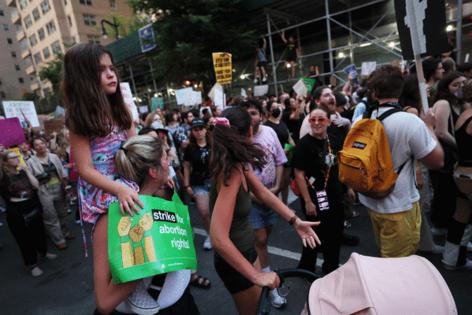 NEW YORK — Thirteen protesters railing against the Supreme Court’s decision to eliminate the constitutional right to abortion were arrested during a late-night march on Friday in Midtown, cops said.

A dozen adults and one teenager were zip-tied and taken into custody near the corner of Sixth Avenue and 42nd Street at 11 p.m. after they sat down in the intersection and began blocking traffic, refusing orders to get out of the street, police said.

The protesters were expected to receive summonses.

The Times Square protest was an offshoot of the one that began in Union Square Park. Hundreds of protesters carrying mournful signs denouncing the 6-3 ruling to overturn the nearly 50-year-old landmark decision swarmed the park and began marching down Fifth Avenue toward Washington Square Park. Other protesters went over the Brooklyn Bridge.

The NYPD deployed additional officers and other resources to monitor the protests throughout the day.

“We are cognizant of the Supreme Court’s ruling today and the strong and divided feelings on both sides of this issue,” a police spokesperson said in a statement. “The NYPD is here to support all expressions of free speech or protest as long as it is peaceful, lawful and non-violent.”