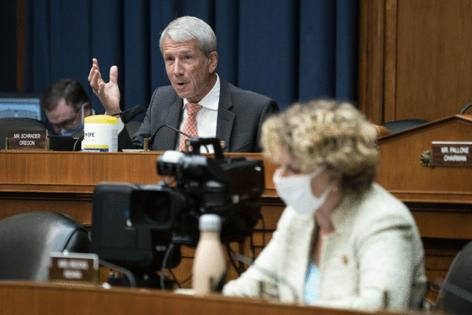 McLeod-Skinner had 57% of the vote to Schrader’s 43% when The Associated Press called the race at 11:55 a.m. Eastern time Friday. The primary, held May 17, took more than a week to call because of vote-counting delays attributed to ballot-printing problems in Schrader’s home county of Clackamas.

President Joe Biden and House Democrats’ campaign arm tried to come to Schrader’s defense, and the incumbent held a strong campaign cash advantage. But it wasn’t enough to overcome the dual headwinds of redistricting and a Democratic primary electorate that has become more liberal.

Republicans were already targeting the district, which Biden won in 2020 by 9 points, for November. GOP operatives now view it as a better pickup opportunity because no one will have the benefit of incumbency and because McLeod-Skinner leans more liberal than Schrader. Inside Elections with Nathan L. Gonzales moved the rating for the race this week from "likely" to "lean Democratic."

In the general election, she will face Republican Lori Chavez-DeRemer, a former Happy Valley mayor who held $135,000 cash on hand as of April 27.

Schrader had $1.3 million in the bank to McLeod-Skinner’s $110,000 as of April 27. He also benefited from more outside spending, with $1.3 million spent supporting him and another $845,000 spent against McLeod-Skinner. Conversely, just $235,000 in outside spending was spent supporting her and only $35,000 spent against Schrader.

McLeod-Skinner portrayed Schrader as distant from his constituents, and progressive activists said that, as a fiscally conservative Democrat, he was out of step with the party and had sided too often with business interests. During his career in the House, Schrader voted with his party, on votes that split Republicans and Democrats, 85.6% of the time, according to CQ Vote Watch.

Schrader is the fourth incumbent to lose a primary this year. The others are Democrat Carolyn Bourdeaux of Georgia and Republicans Madison Cawthorn of North Carolina and David B. McKinley of West Virginia.

Schrader is a member of the Blue Dog Coalition, a group of fiscally conservative Democrats who have been dwindling in number.

Schrader, who was first sworn into the House on the cusp of the Obama presidency, once told Portland-based newspaper The Oregonian that the Blue Dog group is “a balance to the Elizabeth Warrens of the world,” a reference to the progressive Massachusetts senator. Warren endorsed McLeod-Skinner in the primary.