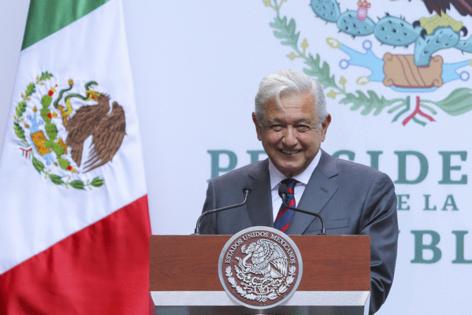 MEXICO CITY — Despite a major U.S. lobbying effort, the president of Mexico hinted strongly Friday that he will not attend a high-stakes regional summit next month in Los Angeles because the Biden administration refuses to invite a trio of leftist governments.

Mexico is arguably the most important Latin American participant in the upcoming Summit of the Americas, which administration officials have said will include a special focus on immigration. It starts June 6.

In his daily marathon news conference, President Andrés Manuel López Obrador said he was still awaiting a response from President Joe Biden or the U.S. State Department to his demand that all countries in the Western Hemisphere be invited.

Every host nation for the summit, which occurs every three or four years, has discretion in drawing up the guest list, and most if not all countries are routinely included. This is the first time the summit is taking place in the U.S. since its 1994 inaugural session in Miami.

Administration officials have made it clear they will not invite Venezuela or Nicaragua, because those countries’ authoritarian leaders do not represent the model of democracy Washington and others in the region seek to promote.

U.S. officials also said initially they would not invite Cuba, then suggested they might welcome a “low-level” delegation from Havana. A diminished status did not appeal to Cuban officials, however, and President Miguel Díaz-Canel said earlier this week he will not attend.

Cuba was present at the last two Summits of the Americas, in Panama and Peru. In Panama in 2015, then-President Barack Obama famously shook hands with then-President Raul Castro, the first such contact between the Cold War enemies in decades. Months later, Washington and Havana opened diplomatic ties and began a warming of trade and travel relations not seen for half a century. The opening was frozen by President Donald Trump and has only haltingly and in minor ways been renewed by Biden, despite his promises as a presidential candidate.

López Obrador, a consummate showman, deliberately did not commit in his remarks Friday morning but ultimately made clear he would not attend if Cuba, Venezuela and Nicaragua were not invited. Instead, he would send a delegate, most likely his more-U.S.-friendly foreign secretary, Marcelo Ebrard.

“We are going to wait to see what they (U.S. officials) decide, but regardless, Mexico will participate,” the president said. “It’s just that I will not attend if all countries are not invited.”