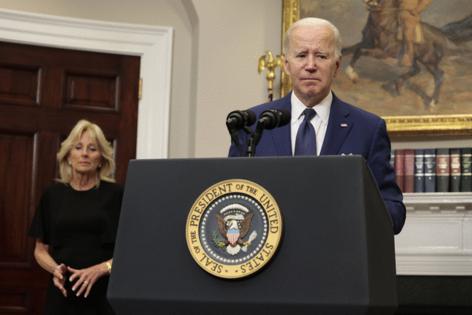 President Joe Biden on Tuesday called for legislation to restrict access to firearms in the wake of the school shooting in Texas that left at least 20 dead.

An 18-year-old gunman, Salvador Rolando Ramos, went into Robb Elementary School in Uvalde on Tuesday and killed at least 18 students and a teacher before he was killed by law enforcement. Authorities said he used a handgun and may have used a rifle, as well.

Biden said he’d hoped when he was elected president he would never have to speak about a school shooting again.

“I am sick and tired of it,” Biden said. “We have to act. And don’t tell me we can’t have an impact on this carnage.”

He questioned from behind the lectern why America has more mass shootings than any other nation and said it is because of Americans’ access to guns. He said other countries have people with mental illnesses, domestic disputes and “people who are lost.”

“These mass shootings never happen with the kind of frequency they happen in America,” Biden said. “Why are we willing to live with this carnage? Why do we keep letting this happen? Where in God’s name is our backbone?”

He said it is time to turn the pain parents and siblings and families are feeling into action to prevent future shootings, and he believes the way to do that is to enact tougher gun restrictions.

“There’s a hollowness in your chest, you feel like you’re being sucked into it,” Biden said. “It’s time to turn this pain into action, for every parent, for every citizen in this country. It’s time to act.”

Biden also called on the nation to pray for the families and communities in Uvalde.