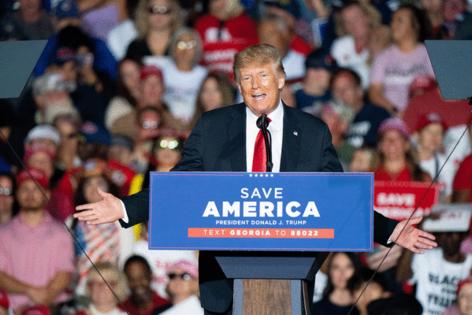 ATLANTA — When Gov. Brian Kemp is asked how he handles Donald Trump's unrelenting fury, he typically launches into the well-practiced answer he offered at a recent stop in Atlanta's exurbs: "I've never said a bad word about their administration. And I don't plan on doing that."

But the constant questions about Trump's obsession with defeating Kemp underscore a painful reality for a Republican on the cusp of a defining political victory.

Even as polls show Kemp is poised to rout former U.S. Sen. David Perdue in Tuesday's primary, the governor must still face the wrath of the former president throughout what's expected to be a bruising November matchup against Democrat Stacey Abrams.

And he has little margin for error against her well-financed campaign and energized Democrats determined to prove their 2020 success in Georgia was not a Trump-fueled fluke.

Kemp has so far navigated that balance delicately. He tells audiences he isn't worried about what "other people say about me" without directly mentioning Trump. And he's taken pains to avoid further antagonizing Trump by heaping compliments on his conservative policies.

"It would be real easy to take that bait," Christie added. "And he has not done it."

That balancing act will soon get trickier.

Even the governor's loyalists acknowledge that Trump's hatred of Kemp likely won't abate if Perdue's bid collapses. The former president blames Kemp more than perhaps any other politician for his 2020 defeat and has taken extraordinary steps to punish his onetime ally.