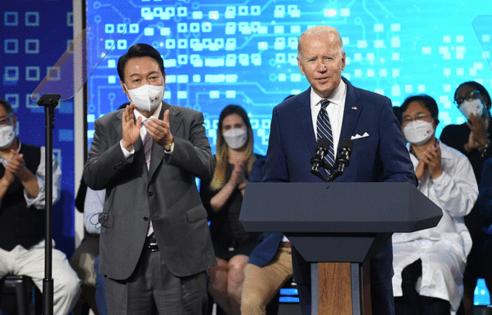 President Joe Biden called the U.S-South Korea alliance “a lynchpin of peace, stability, and prosperity” during a visit Friday to a Samsung Electronics Co. semiconductor complex as he seeks to bolster supply chains that reduce reliance on China.

“I’ve just seen how this plant makes the most advanced semiconductor chips in the world,” Biden said following a tour of the facility, his first stop after landing outside Seoul to start a five-day visit to South Korea and Japan.

During the trip, Biden’s first to Asia as president, he’s meeting with regional leaders in a bid to firm up support for helping Ukraine fend off Russia’s invasion and countering security threats posed by China and North Korea, which may conduct its first nuclear test since 2017 with Biden nearby.

“The alliance between the Republic of Korea and United States of America is a lynchpin of peace, stability, and prosperity for a region of the world that we seek,” Biden said.

South Korean President Yoon Suk Yeol, who took office May 10, joined Biden at the event and said that “based on advanced technology and supply chain cooperation,” he’d seek to upgrade U.S.-South Korea relations “into an economic-security alliance.”

Biden’s trip to the Samsung facility underscores the emphasis he’s placed on strengthening semiconductor alliances among the world’s largest chip making countries to try to ease shortages that have dragged on the global economy. The complex in Pyeongtaek, south of Seoul, houses the some of biggest chip production lines in the world and makes a wide range of products from memory chips to logic chips for Qualcomm Inc. and other companies.

Samsung is responsible for a third of global memory chip production and controls just less than 20% of outsourced chips for tech clients. South Korea’s largest company has been expanding its facilities at home and in the U.S. to keep up with soaring demand.

South Korea “is taking a key role in a global chip supply chain by producing 70% of memory chips for the global market,” Yoon said.

Biden renewed his call for Congress to pass a broad China competition bill that includes $52 billion in funding for domestic semiconductor research and manufacturing.

Lawmakers still have to work out differences between the Senate- and House-passed versions of the legislation, a process that could take until the end of the summer.

Over the ...Read More