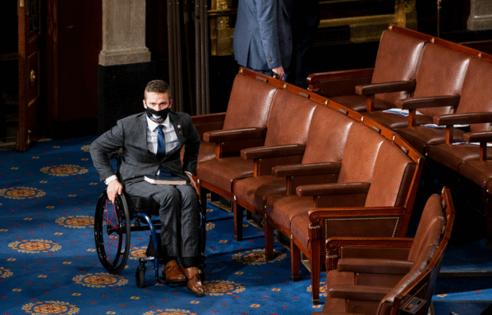 WASHINGTON — Two days after U.S. Rep. Madison Cawthorn lost his reelection campaign, the first-term North Carolina Republican called on a political movement to put a more vengeful Donald Trump back in power and seek revenge on his enemies.

“It’s time for the rise of the new right, it’s time for Dark MAGA to truly take command,” Cawthorn, 26, wrote on Instagram. “We have an enemy to defeat, but we will never be able to defeat them until we defeat the cowardly and weak member of our own party. Their days are numbered. We are coming.”

Twitter users describe “Dark MAGA” — a take on Trump’s Make America Great Again slogan — as a group that believes there’s no political solution beyond vengeance, Newsweek reported, and that the former president has been too kindhearted and forgiving to his political opponents. It also has ties to neo-Nazi and white supremacy, Business Insider reported.

Cawthorn conceded the election before the race was called and went silent on social media until Thursday afternoon.

He returned to Twitter midday with “The best is yet to come.”

On Instagram he added: “When the establishment turned their guns on me, when the Uni-party coalesced to defeat an American First member very few people had my back,” Cawthorn wrote.

Cawthorn wrote that he believed there are national figures who are patriots, but his mission now is to expose “those who say and promise one thing yet legislate and work towards another, self-profiteering, globalist goal.”

“The time for gentile (sic) politics as usual has come to an end,” Cawthorn wrote.

Trump and Cawthorn supported each other’s campaigns in 2020 and have spent considerable time in one another’s orbits. Cawthorn has told reporters before that he considers Trump like “a father.”

Cawthorn spoke at Trump’s rally on Jan. 6, 2021, outside the Washington Monument before the group marched to the U.S. Capitol in an attempt to stop the certification of President Joe Biden.

Cawthorn famously said in Macon County: “If our election systems continue to be rigged, and continue to be stolen, then it’s going to lead to one place, and it’s bloodshed. I will tell you, as much as I am willing to defend our liberty at all costs, there is nothing that I would dread doing more than having to pick up arms against a fellow American.”

Cawthorn also had a long series of controversies leading up to his primary Thursday night, which Trump addressed the night before asking voters to give Cawthorn a second chance.

Cawthorn, on Thursday, included a list of people who have defended him, even when it didn’t serve their interests. The list includes Fox News’ Tucker Carlson, Rep. Marjorie Taylor Greene, Rep. Paul Gosar and Club for Growth President David McIntosh.

Greene and Gosar have also used imagery tied to Dark MAGA on their social media.

Dark MAGA memes on social media show conservative influences with red and black colors and lasers shooting from their eyes. Some show Trump dressed in black with guns in his hands and the words “Remember what they took from you.”