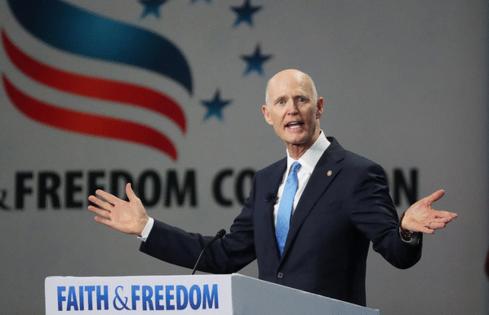 The gloves are already off with six months to go before the midterm elections.

There was a time when a member of Senate leadership saying a sitting commander in chief is unfit for office would have been a big deal. Such calls were saved for times of war or impeachment or scandal. No more.

In a telling sign about the country’s deeply divided politics, the Florida Republican’s remark was mostly an afterthought in the age of Twitter and prime-time cable programming. Both are avenues for all sorts of bombastic statements. Both have made us collectively numb.

“In the private sector, when you have a CEO that doesn’t have the ability to deal with something, they resign. They go and do something else. Joe Biden ought to do the exact same thing,” Scott told reporters Tuesday.

For those who might have forgotten, Scott has some experience here, resigning in 1997 as CEO of Columbia/HCA hospital group. After his departure, as PolitFact puts it, “the hospital company was fined $1.7 billion for Medicare fraud.”

With the Senate moving toward a Wednesday procedural vote on a Democratic-crafted measure that would have codified abortion rights and the landmark decision Roe v. Wade expected to be overturned in a few weeks, the former governor’s remark was just another paragraph in most news articles.

But in another period, it would have landed with more of a thud. Consider that Scott is no average freshman senator. He is a successful former governor of a state with one of the country’s most robust economies. He is a member of the Senate GOP leadership team. And he is the National Republican Senatorial Committee chair.

Scott is also not the sort to harbor many regrets.

“No,” Scott said Thursday when asked by CQ Roll Call if he called for Biden to step down lightly, before ticking off his gripes with the 46th president’s performance on matters like record inflation and high gas prices.

“He’s failed. You saw the press conference (Tuesday), he doesn’t even know what state I’m from. He’s confused. He lies about things and blames everyone else,” Scott said. “The guy can’t do the job. It’s real simple.”

Never mind that the president was citing specific Supreme Court decisions with no notes during a Democratic fundraiser this week in Chicago.

Vice President Kamala Harris is hugely unpopular among Republican voters, with YouGov putting her disapproval rating with that group at 88.3%. Still, Scott delivered what amounted to a backhanded endorsement when asked if he think she would be a better president than her boss: “I don’t know how you can be worse than Biden’s done.”

For his part, Biden has eagerly elevated the NRSC chairman and what the president has dubbed his “ultra-MAGA agenda” economic plan, hoping to lump both in with Donald Trump and his Make America Great Again movement as a midterm election-trail counter to Republican efforts to make November’s races a referendum on Democrats.

“I think the man has a problem,” Biden said this week when asked about Scott’s assessment of him.

Biden ran as the lone 2020 presidential candidate who might have a shot at fostering some unity in a bitterly divided country. He has rarely played that role since entering office, however, something Republicans point out daily.

But both parties possess some ownership of America’s tribal politics.

Asked if he believes his tit-for-tat with Biden, complete with both diagnosing each other’s mental health from afar, is constructive political discourse, Scott replied tersely: “I’m here to get something done.”

Scott clearly has no regrets, but such bold rhetoric and a war of words with a Democratic president could bring big rewards. After all, someone will assume the mantle of top Republican when Trump finally exits the political stage.

Biden, interestingly, chose Scott. In politics, it is said a president should never “punch down.” But the White House sees an opportunity in Scott’s plan, with the president himself now almost daily calling it a tax-hiking wolf disguised as a MAGA sheep.

Biden’s attacks on Scott and the MAGA movement he says is the “most extreme” political movement in American history included what White House aides previewed as a major policy address by Biden about countering inflation on Tuesday.

But what he delivered was a political speech meant to cast doubt in swing voters’ minds about the economy with Republicans in charge. The president made clear that the midterm elections were very much on his mind at the top of his remarks, saying: “Today, I’d like to talk about two potential paths forward to address the No. 1 challenge facing families today — inflation.”

He focused mostly on the GOP’s proposed path, jabbing repeatedly at the former Florida governor.

“What’s the congressional Republican plan? They don’t want to solve inflation by lowering your costs. They want to solve it by raising your taxes and lowering your income,” Biden said. “I happen to think it’s a good thing when American families have a little more money in their pockets at the end of the month, but the Republicans in Congress don’t seem to think so. Their plan … is going to make working families poorer. You don’t have to take my word for it. It’s in writing. They’ve made their intentions perfectly clear.”

“It’s the ‘ultimate MAGA agenda.’ Their plan is to raise taxes on 75 million American families, over 95 percent of who make less than $100,000 a year total income,” the president added, using estimates Republicans dismiss.

Biden also made a point to stress that the COVID-19 pandemic and Russia’s war in Ukraine are, in his view, the main drivers of increased prices. Republican lawmakers say Democrats’ penchant for big government spending and Biden’s bungling of things like the ongoing gas price hike are to blame.

In the speech, Biden repeatedly reiterated his previous policies, such as pressing large corporations to “not engage in price gouging, and to pay their fair share in taxes.” He spoke of previous proposals to hand out tax credits so Americans can make their homes more energy efficient and tax credits to businesses who produce renewable energy products, among other things.

“My plan is already in motion,” Biden declared. But major parts of it are not. Those might be permanently stalled in the evenly divided Senate as part of his derailed “Build Back Better” plan.

Some Democratic caucus members want the president to do more.

“I think there has got to be an awareness that a lot of inflation — not all of it, but a lot — is driven by corporate greed,” said Senate Budget Committee Chairman Bernie Sanders, I-Vt., “and that prices are rising outrageously from companies that are making huge profits. We have got to be mindful of that.”

Sen. Bob Menendez, D-N.J., said he is aware that White House officials are “busy working on a number of things” to pare prices — but he did not name any in a brief interview. And Sen. Richard Blumenthal, D-Conn., shrugged off the back-and-forth: “I don’t regard it as a big deal.”

“We really should focus on the common challenges, as President Biden has done, regarding inflation, COVID-19,” Blumenthal said. “I’m hoping Sen. Scott’s remarks will be no impediment to our moving forward on Ukraine assistance and a COVID supplemental, and other measures that we need to do.”

The bottom line: Biden and Democrats are struggling with their counter-inflation messaging.

“This is not the last you’ve heard from us on ultra-MAGA,” outgoing White House Press Secretary Jen Psaki told reporters of the Scott-crafted plan.

Biden’s pivot to attacking Scott and the MAGA movement has been welcomed by many Democrats.

“The fact Fox responded to Biden calling out Rick Scott’s plan to increase taxes means it worked. They got defensive. This is what it’s like to finally go on offense and hit. Do this nonstop,” tweeted Wajahat Ali, a senior fellow at the left-leaning Western States Center, which pushes progressive policies.

The messaging pivot adds up politically — but only if there is more substance coming from the administration, rather than merely ticking off a list of policies that polls show voters don’t think are working.