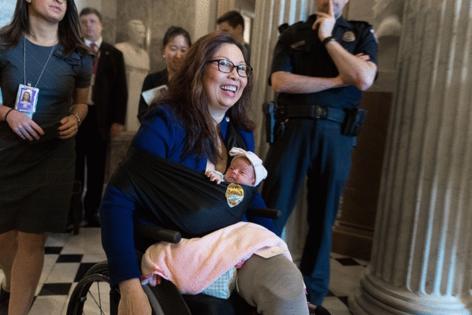 WASHINGTON — Sen. Tammy Duckworth made history in 2018 when she became the first senator to give birth while in office. She underwent in vitro fertilization, a procedure used to assist women in getting pregnant by fertilizing an egg in a laboratory setting and implanting it in the uterus.

Now the Illinois Democrat, doctors and advocates are worried about how the Supreme Court potentially overturning a 50-year-old precedent establishing abortion rights could impact IVF, which has helped millions of people struggling with fertility issues conceive.

More than a dozen states have “trigger” laws on the books that would ban abortion if the court overturns Roe v. Wade, and some are written to state that life begins at conception or fertilization. That raises questions about what would happen with IVF, which can result in excess embryos that people sometimes discard, freeze for future use or donate to science or other people.

IVF has become increasingly common, with the Centers for Disease Control and Prevention estimating about 2.1 percent of children are now conceived through this type of process.

These so-called personhood bills have gained popularity in conservative state legislatures over the past decade and the overturning of Roe could create new momentum among anti-abortion activists and lawmakers, said Karla Torres, senior human rights counsel for the Center for Reproductive Rights. Some personhood laws or ballot measures have previously been blocked by courts under the precedent established by Roe or a similar case called Planned Parenthood v. Casey.

“Overturning Roe would really open the door to legislative interference, not only with reproductive decision-making but also around decisions to build families through assisted reproduction, specifically IVF,” Torres said.

She said she is concerned people using IVF and their doctors could face criminal liability for miscarriages, or freezing or discarding embryos. There are an estimated 1 million frozen embryos in the U.S., according to The National Embryo Donation Center in Knoxville, Tenn.

MINNEAPOLIS — Donald Trump's endorsement is helping shape Republican races across the country, but the former president hasn't picked a side in the party's unsettled race for Minnesota governor.