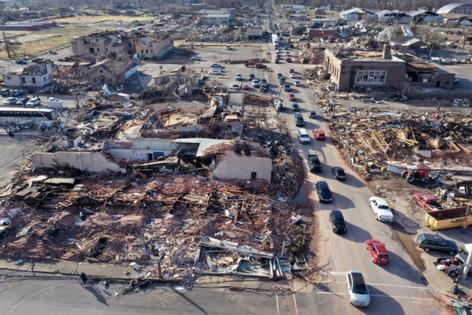 BOWLING GREEN, Ky. — First Lady Jill Biden toured a Bowling Green neighborhood on Friday that was ravaged by a tornado and promised that the town would recover in the months ahead.

“I know it probably felt more like an end than a beginning,” Biden said of a second, less powerful storm that unnerved residents when it Bowling Green on Jan. 1, just weeks after the deadly Dec. 11 tornadoes.

“Yet something new has begun,” Biden said. “Not the quick turn of a calendar page, but the slow movements of the seeds deep in the earth climbing toward the light that will come this spring.”

Biden heaped praise on the lines of people who donated blood, the food trucks that descended upon the area and the neighbors who offered their generators to families without power.

“It will take time to make this beautiful place whole again,” she said, “but what we’ve seen, what we’ve all seen today, is there is faith here too.”

Biden visited the Creekwood neighborhood, which was decimated by a powerful tornado early on Dec. 11.

The tornado killed 16 people directly in Bowling Green and Warren County, and a 17th person died of a heart attack he suffered while cleaning up debris.

There were dozens of people injured. Of the 16 people killed, 12 were from two families who lived on one street in the Creekwood neighborhood. It took five days for searchers to find the final victim, a 13-year-old girl whose parents, three siblings and grandmother also died.

The National Weather Service determined that a total of three tornadoes hit Bowling Green that morning, destroying 500 homes and apartment buildings, badly damaging another 500, displacing thousands of people and damaging or destroying about 100 businesses.

The first lady visited with about 20 residents whose homes were damaged. Offering hugs and words of encouragement, Biden walked amid trash, debris and broken glass that remained on the ground as the clean-up continued a month later.