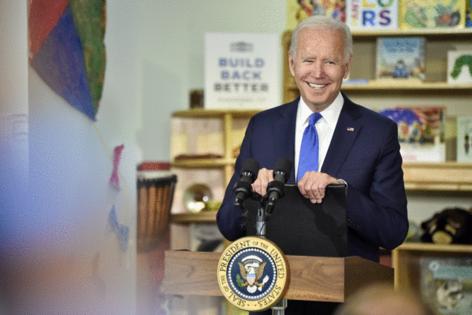 President Joe Biden has made a New Year's resolution of fighting for his expansive Build Back Better agenda, which flopped late last year thanks to resistance from members of his own party. A key piece of the package is affordable child care, and while that may sound good, the plan would likely raise costs and give parents fewer options.

The president claims more women could get back into the workforce if they had access to less costly child care and preschool. It's true that women were especially hit during the pandemic (thus the "she-cession"). Not only were jobs women held most impacted by COVID lockdowns, but mothers often took on most of the burden of overseeing children learning at home during long periods of school closures.

For many, it was simply easier to quit their jobs. That gap between men and women still remains even as more Americans return to work.

Biden believes there's a government fix. Last week, in a speech tied to the latest jobs report, the president stressed how the social welfare bill sets aside about $400 billion for child care and universal preschool.

"Right now, there are 2 million extremely qualified women who have not been able to return to work because they can't find or can't afford child care," Biden said.

Biden had previously noted many Americans are paying "14,000 bucks a year" for child care, and that his plan would cut that cost in half.

Democrats want to cap what most parents spend on child care at 7% of their income. This subsidy would be phased in over time, so while it may initially benefit lower-income families, other families would very likely be stuck with a higher tab as child-care centers raise costs to meet new salary demands and other mandates in the bill.

Those costs would rise for all families, not just the ones who qualify for subsidies, meaning that for many Americans the financial burden of child care would actually increase.

Carrie Lukas, president of the free-market Independent Women's Forum, says there's plenty of reason to be skeptical about a massive expansion of government control in early childhood education.

By holding the strings to such a significant investment, the federal government would also get to decide what is taught and who gets to teach, Lukas says. The added regulatory burden and oversight could push faith-based providers out of the market, an option that half the parents who use outside child care enjoy.

"The federal government would set the rules for what it means to be a 'quality' child care or preschool provider, and only government-approved providers would be eligible for the subsidies," writes John Schoof, an expert in education policy at the Heritage Foundation. "This would put small, independent providers at a huge disadvantage."

If Biden wants to help women get back to their jobs, he should make a definitive stand for getting K-12 schools back in person, regardless of COVID spikes. Certainty about the status of schools would encourage more women to return to work.

Such a massive and costly expansion of child care will only further fuel the inflation hurting families, and it could ultimately take away options parents currently enjoy.