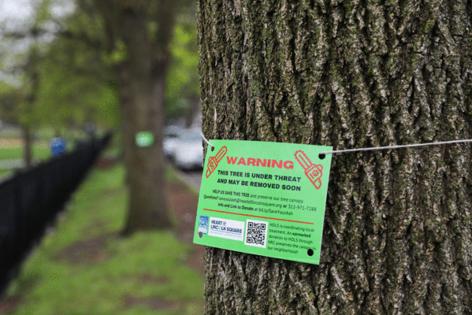 Cleveland, once known as the Forest City, has lost about half of its tree canopy since the 1950s due to diseases, urban development and storms. In the neighborhoods where trees are gone, including many on the majority-Black east side of Cleveland, that loss has been keenly felt.

"If you look at an aerial map, these communities look dramatically different," said Randy McShepard, a co-founder of the Rid-All Green Partnership, a group that leads urban agriculture projects in underserved neighborhoods of Cleveland. "It's no surprise that those communities with less tree canopy have higher incidences of asthma, heat islands and stormwater flooding."

McShepard's group is part of the Cleveland Tree Coalition, a collaboration of public and private organizations that seeks to plant at least 360,000 trees over the course of a decade.

Cleveland is among a growing number of cities and states that have come to regard trees as essential infrastructure. At the same time, research is showing that communities of color and low-income neighborhoods have significantly less tree canopy than wealthier, white neighborhoods. Unshaded areas often suffer from an urban heat island effect, in which heat-absorbing asphalt can send temperatures soaring up to 10 degrees hotter than in surrounding neighborhoods.

Programs such as the Cleveland Tree Coalition could get a big boost from the "Build Back Better" legislation currently being debated in Congress. The bill would provide $2.5 billion to improve and maintain urban tree canopy, focused on underserved communities. The funding would massively scale up the U.S. Forest Service's Urban and Community Forestry Program, which currently stands at $40 million a year.

The program provides technical assistance, financial support and education to about 7,500 communities a year.

"With limited resources, there's only so much work we can do," said Beattra Wilson, who leads the Forest Service program. "With [Build Back Better funding], we can continue to drill into disadvantaged communities and provide confidence and trust that there can be sustained improvement in urban forestry work for years to come."

Island territories such as American Samoa, Wilson said, are particularly vulnerable to climate change and also rely on the federal money.

But the proposed funding increase has drawn backlash in recent weeks from some Republicans in Congress and conservative commentators. Opponents have used tweets, newspaper opinion pieces and cable news critiques to characterize the investment as wasteful Democratic spending to plant "non-racist trees" in liberal cities.

Before Ketanji Brown Jackson was one of the front-runners for a U.S. Supreme Court nomination, she was a speech and debate superstar at Miami Palmetto Senior High School.

Justice Stephen G. Breyer has made many rulings during a long and distinguished career, but his most consequential may turn out to be the one reported Tuesday: He will retire from the U.S. Supreme Court at the end of its ...Read More