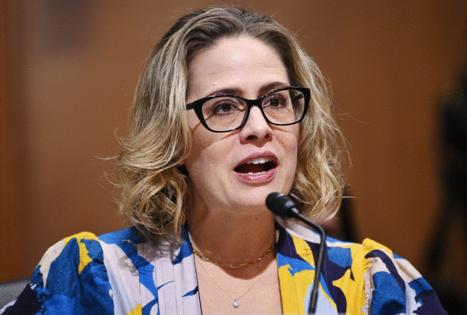 The moderate holdout broke her silence on Friday about President Joe Biden’s $1.8 trillion social spending plan, saying only that she is still negotiating with fellow Democrats.

In a rare TV interview, the usually tight-lipped Sinema declined to back the bill, which the House of Representatives passed last month.

“We’re crafting legislation that truly represents the interests they want to achieve and that creates a benefit and helps people all across Arizona and the country,” Sinema said to CNN. “So that’s what I’m working on right now.”

Sinema also declined to say exactly what provisions she wants cut or modified, a practice that has infuriated progressives looking to win passage of the bill.

“When you negotiate directly in good faith with your colleagues, and don’t negotiate publicly, you’re actually much more likely to find that agreement,” Sinema said.

Biden has vowed to win over all 50 Democratic senators and Majority Leader Sen. Chuck Schumer, D-N.Y., says he wants it done before Christmas.

Sinema and Sen. Joe Manchin, D-W.V., are the two high-profile Democratic holdouts in the evenly divided Senate on Build Back Better. Democrats need all their senators to support the bill to enable it to pass with Vice President Kamala Harris holding a decisive tie-breaking vote.

Manchin has also said he is not ready to vote in favor of the bill, but he has been more open than Sinema about his specific objections.

Even though the pair are often lumped together as moderate holdouts, they have different and sometimes conflicting issues with the bill as it stands.

Manchin wants a popular family leave proposal stripped out of the bill, but Sinema supports that plank. The coal-state stalwart objects to some climate change provisions, while Sinema succeeded in watering down a proposal to lower prescription drug costs.

Both Sinema and Manchin say they are concerned about the bill’s potential impact on inflation, even though economists say it would actually help keep a lid on prices.