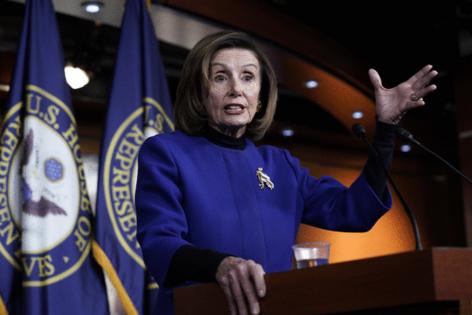 WASHINGTON — Congress approved a government spending bill late Thursday, averting a potential government shutdown with about 24 hours to spare after the latest example of the partisan standoffs crippling Washington's most basic functions.

Republican and Democratic congressional leaders had brokered an agreement Thursday morning to fund the government through Feb. 18. But getting the deal to the president's desk before the Friday night deadline required all 100 senators to consent to speeding up the Senate's legislative clock.

A handful of Senate Republicans said they would not agree unless there was also a vote on an amendment to defund the Biden administration's COVID-19 vaccine-or-testing mandate for some workers. Led by Sens. Mike Lee of Utah and Roger Marshall of Kansas, they also demanded that the amendment's voting threshold be a simple majority of 51, rather than the usual 60 votes needed to overcome a filibuster.

"A vaccine mandate is going to cause hundreds of thousands of Kansans to lose their job," Marshall said of people in his home state. "This is about an economic shutdown. It's not just about a government shutdown."

By evening, Democrats agreed to grant Republicans their amendment vote, largely because two GOP absences ensured the effort would fail.

"I am glad that in the end, cooler heads prevailed; the government will stay open," Senate Majority Leader Charles E. Schumer, D-N.Y., said as the votes got underway Thursday night.

After the vaccine amendment failed, the Senate approved the government spending bill, 69 to 28.

The House had previously approved it in a 221-212 vote, with support from all Democrats and a lone Republican, Rep. Adam Kinzinger of Illinois.

The spending agreement will keep funding at previously set levels through Feb. 18. Democrats wanted a shorter extension because they don't want to live longer than necessary under levels negotiated with former President Donald Trump. But that would have required agreement with Republicans on new funding levels.

Had a shutdown occurred, it probably would have been brief — lasting only as long as the Senate took to run out the debate clock. Still, even short shutdowns mean added uncertainty for federal operations, and many senators, even those in the minority, are loath to risk the embarrassment of Congress failing to live up to one of its most basic requirements.