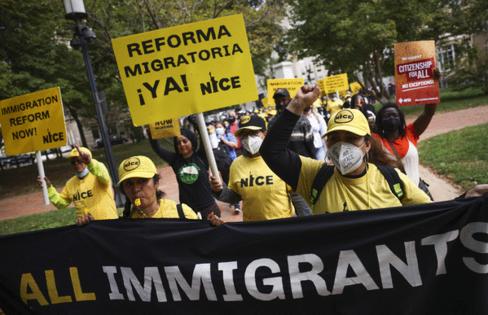 After months of back-and-forth, the House passed a version of the nearly $2 trillion budget reconciliation bill that includes no new path to permanent residency or citizenship for the country’s beleaguered undocumented populations, a stinging disappointment after an initial effort to formalize the status of millions of people.

Instead, the bill would create a standardized program for granting humanitarian parole to people without legal status who’ve been present in the country since before the start of 2011. Parole is a temporary designation that the executive can grant discretionarily, meaning that the bill would establish access to a benefit that already exists, one that, like DACA and Temporary Protected Status, leaves participants in a state of ultimate limbo.

Still, for millions of people around the country, not to mention for the recovering economy, work authorization and protections from deportation will make a world of difference. It’s not enough, but it is certainly better than nothing, which is why it absolutely needs to remain in the final version of the Senate reconciliation bill.

Unfortunately, there is a real risk that it won’t. Unlike some other administration priorities that have been bumped from the bill, the main peril to the immigration measure’s success comes not from moderate Democrats but from Senate Parliamentarian Elizabeth MacDonough, who has twice ruled against efforts to enact a more permanent fix for immigrants. In her estimation, these measures were mainly intended to shift policy, not budgets, and therefore were inappropriate to include in the bill.

In this case, what is being contemplated is not a change to existing laws, and there should be no reason to interfere with its inclusion. It’s a wretched state of affairs that there are almost no prospects for a stand-alone immigration bill given that legalizing longtime immigrants is overwhelmingly popular with the U.S. public and had been a point of relative bipartisan consensus up until the last couple of decades. Still, as things stand, this reconciliation is the only shot, and it should include these protections.