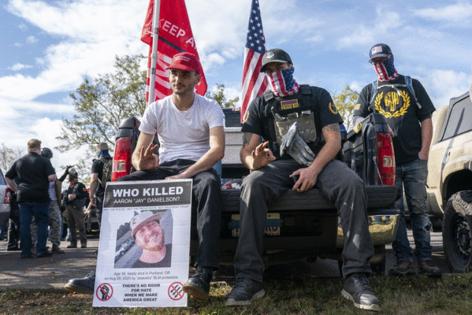 As part of their campaign, the conspirators got confidential U.S. voter information from at least one state election website and sent threatening email messages to intimidate people before they cast their ballots, prosecutors said.

The disinformation duo also created a video that detailed false voting vulnerabilities, and even gained unauthorized access to a U.S. media company’s computer network — but were stopped before they could do any further damage to it, authorities said.

The accused hackers were equal opportunity disruptors. According to the indictment, hackers targeted Republicans with messages claiming voter fraud, and Democrats with “false flag” threats from the Proud Boys.

The false election messages claimed that the Democratic Party was planning to exploit “serious security vulnerabilities” in state voter registration websites to “edit mail-in ballots or even register nonexistent voters.”

Hackers also sent intimidating emails to tens of thousands of registered voters, threatening them with physical injury if they did not change their party affiliation and vote for Trump.

Even the day after the election, on Nov. 4, the suspects tried to use stolen credentials to gain access to a media company’s computer network to disseminate more false information, the indictment said. But the log-in attempts failed.

Kazami and Kashian are not in custody, and Williams’ statement suggests it’s unclear if they ever will be. “Kazemi and Kashian will forever look over their shoulders as we strive to bring them to justice,” Williams said.

If convicted, the suspects face between five and 10 years in prison.