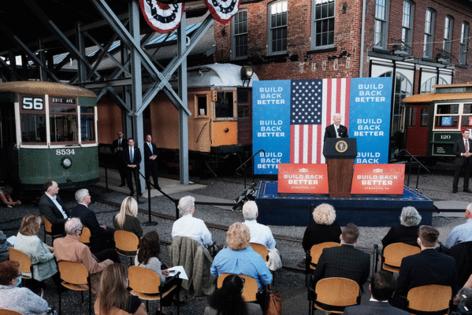 WASHINGTON — The White House said President Joe Biden made progress on his big tax-and-spending plan in a meeting with key moderate Senator Joe Manchin and Majority Leader Chuck Schumer, though further talks among staffers will be needed.

The rare Sunday meeting, held over breakfast at the president’s home in Delaware, was the latest step in Biden’s push to secure a framework agreement among Democrats on a package ranging as high as $2 trillion. A White House statement gave no indication of specific areas of progress.

“They continued to make progress, will have their staffs work on follow-ups from the meeting, and agreed to stay in close touch with each other and the wide range of members who have worked hard on these negotiations,” according to the statement early Sunday evening.

Democrats have voiced hope that an agreement in principle on the bill will allow the House to vote this week on a separate $550 billion physical infrastructure bill that has been held up by progressives wanting a deal on the larger bill.

House Speaker Nancy Pelosi said a framework for the legislation is close, with the White House and leaders trying to hammer out final matters such as taxes and which components of a Medicare expansion to include.

“We have 90% of the bill agreed to and written, we just have some of the last decisions to be made,” Pelosi said on CNN’s “State of the Union” on Sunday.

Without congressional action, highway funding runs out Oct. 31, though Congress could pass another short-term extension as it did in September.

The White House and Manchin have differed on the terms of the top-line spending level for the bill, which creates and expands programs aimed at helping women, minorities, children and the elderly.

Manchin, who represents West Virginia, has talked about a $1.5 trillion spending level while Biden has recently advocated for something in the range of $2 trillion. The original House-passed framework totaled $3.5 trillion.

There’s also a question of whether the bill will include an expansion of Medicare for dental, vision and hearing benefits, as well as whether a plan for paid family leave will be scaled down or left out of the package.