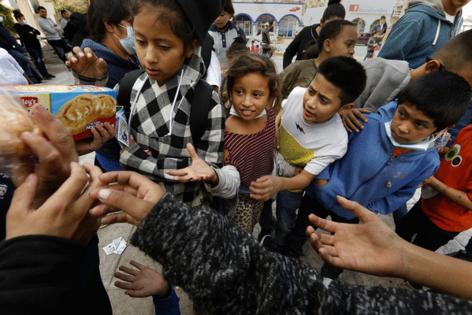 WASHINGTON — U.S. officials encountered more than 1.7 million migrants crossing the border with Mexico over the past year — a record number likely to escalate Republican attacks on the Biden administration’s handling of immigration.

U.S. Customs and Border Protection reported 1.73 million southwest border encounters overall, but many were making repeat attempts, the agency said. CBP’s Border Patrol conducted 1.66 million of the apprehensions, the highest number agents have ever recorded at the U.S.-Mexico border

“CBP will continue its work to ensure safety and security at our borders, while managing a fair and orderly immigration system, and facilitating the legitimate trade and travel that is vital to the American economy,” Acting Commissioner Troy Miller said in a statement.

Monthly updates this year have fueled criticism and public outrage from Republicans, who are seeking to make border security a key campaign issue against Democrats in next year’s midterm elections, with control of both chambers of Congress at stake.

“For some strange reason people still seem to say this is some kind of cyclical event,” Sen. James Lankford, R-Okla., who’s up for reelection next year, said during a recent news conference with fellow Republicans. “This is a problem based simply on the policy changes that happened on January the 20th of this year.”

CBP encounters at the southern border decreased from August to September. A majority of migrants were expelled from the U.S.

Biden administration officials have acknowledged unprecedented challenges at the border but resisted calling it a crisis — instead attempting to project an image of control and long-term planning.

Vice President Kamala Harris is leading the administration’s “root causes” strategy to address why so many people leave their homes in the Northern Triangle countries of Guatemala, El Salvador, and Honduras, and elsewhere.

The majority of migrants apprehended in fiscal 2021, almost 1.4 million, hailed from Mexico and the Northern Triangle. But the coronavirus spurred of hundreds of thousands of people, primarily from Latin America and the Caribbean, to head for north, complicating the efforts of the Biden administration.