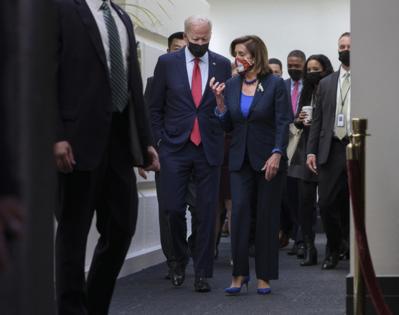 “Millions of American parents, especially moms, can’t be part of the workforce because they can’t afford the cost of child care,” Biden said Friday in a library at the Capitol Child Development Center in Hartford, Conn.

The president noted that the issue was personal for him: After his wife died in a car crash in the 1970s, he struggled to afford child care on his $42,500 Senate salary.

Democrats are proposing to decrease the cost of child care and raise wages of daycare workers in a multi-trillion-dollar spending package that has sparked a fight between the party’s progressives and moderates over its cost and scope.

Party leaders are seeking to pass the measure — which would fund a laundry list of social, medical and environmental programs — through a process known as reconciliation. That process requires a simple majority in the evenly split Senate to pass measures directly tied to the budget. If Independents join all Democrats, Vice President Kamala Harris can break the tie and send the bill to Biden’s desk.

Two Democrats — Sens. Joe Manchin III of West Virginia and Kyrsten Sinema of Arizona — have balked at the proposed $3.5-trillion price tag and threatened to withhold votes unless the package is trimmed. In seeking to reduce its cost, Democrats are debating whether to fund a few programs with long lifespans or a smorgasbord of initiatives over just a few years. They are also deciding whether to target programs to those in need, or offer them to a broader section of the electorate.

Republicans are unified in their opposition to the package, saying it costs too much.

Biden on Friday acknowledged the package would fall below its original price tag but said he was optimistic it would pass.

House Speaker Nancy Pelosi said Tuesday that the length of several major programs would have to shrink in order to bring the price tag.

“I’m very disappointed that we’re not going with the original $3.5 trillion which was very transformative,” Pelosi told reporters.

Pelosi can lose only three votes in the House, where progressives have been pushed by party leaders for more robust spending on an array of social programs.

Proposals that would reduce the cost of child care and boost the pay of child care workers are politically popular and among the spending bill’s least controversial provisions.

If the current proposals are adopted, the average family could save about $15,000 annually on child care costs.

Through an array of subsidies and by expanding the child tax credit, which is set to lapse at the end of the tax year, most families would not have to spend more than 7% of their income on child care, according to a Treasury report. The average family with at least one child younger than 5 spends about 13% of its income on child care, the report said.