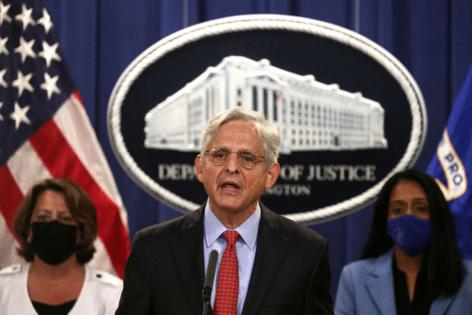 WASHINGTON — The Biden administration has thrust itself into the center of the heated debate over school mask mandates with actions aimed at shielding school boards from threats of violence and intimidation and state-level political pressure.

The administration’s intervention in the issue has sparked an outcry from Republicans about parental rights and federal overreach. GOP lawmakers have condemned a Department of Justice memo on school-related threats as an effort to criminalize protests by parents.

The memo from Attorney General Merrick Garland promising to steer federal resources toward identifying and prosecuting threats against school officials followed the Education Department’s investigations of states that have prohibited school mask requirements. The White House declined to comment on why schools have become the center of the political debate on COVID-19.

Several school board officials and educators from around the country told McClatchy they supported federal engagement, saying it will help ensure safety as tensions continue to escalate a year-and-a-half into the pandemic.

“Folks shouldn’t be receiving death threats or that sort of thing because they’re trying to do what’s best for kids,” said Heather Ousley, a member of the school board for the Shawnee Mission School District in Kansas.

Garland issued a memo last week to the FBI and federal prosecutors that highlighted “a disturbing spike in harassment, intimidation, and threats of violence against school administrators, board members, teachers, and staff who participate in the vital work of running our nation’s public schools.”

It directed the FBI to coordinate with state and local law enforcement agencies to discuss strategies for addressing such threats.

In Florida, a member of the Brevard County School Board spoke out this week and alleged that she and her family were threatened because of her support for mask requirements.

“I am not opposed to people practicing their First Amendment rights even when it’s outside my home,” Jennifer Jenkins told her fellow board members at a meeting. “What I reject is this effort to create fear and division in the community that leads to credible threats of violence against me and my family.”

The video of Jenkins’ emotional testimony, in which she said opponents of mask mandates followed her car, went behind her home and were “brandishing their weapons” at her neighbors, circulated widely on social media this week.