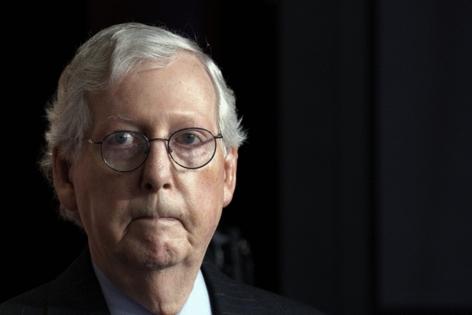 Journey with us, if you will, all the way back to August 2019. In a budget deal passed by Congress and signed by President Donald Trump, Washington suspended the U.S. debt limit for two years — two years in which Republicans refrained from pitching a fit every time the U.S. needed to borrow more money.

And borrow we did, under an administration and Congress that slashed taxes by trillions while dramatically increasing federal spending, even before the COVID crisis hit. With aid of three separate increases to the debt ceiling, the federal debt soared by nearly $7.8 trillion during Trump’s four-year tenure — the third biggest increase relative to the size of the economy of any presidency in history (after Lincoln, who fought a civil war, and George W. Bush, who launched two foreign wars).

It is therefore the purest form of chutzpah for Sen. Mitch McConnell and other Republicans who facilitated Trump’s reckless record to now lay down in the middle of the tracks and refuse to raise the government’s debt limit as a fiscal freight train barrels toward us, toying with America’s full faith and credit.

“We will not support legislation that raises the debt limit,” quoth the Republican Senate leader, who hails from a state that benefits hugely from federal largesse. He and his fellow partisans have the gall to claim it is the social spending of Joe Biden and other Democrats that fueled the red-ink rise. In fact, 97% of the nation’s current debt was accrued before Biden took office.

We wish we could say Republicans are treating Americans like fools, that the vast majority will see through their gaslighting. The sad truth is, the debt and deficit remain a potent political weapon with a critical mass of voters who rage against the Washington machine. So, each and every time Republicans are out of the White House, they wield the weapon like warriors, before proceeding to fall on their swords whenever one of their own is in power.

So predictable, so poisonous.