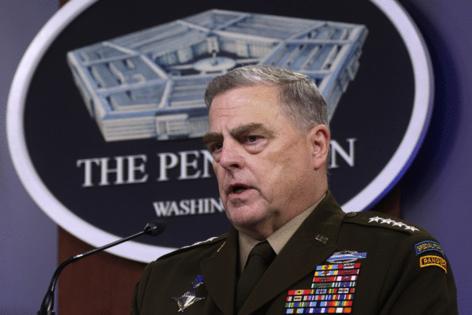 Former President Donald Trump was secretly stripped of his power to order nuclear strikes or launch military actions by top military brass in his final chaotic days in the White House, according to journalists Bob Woodward and Robert Costa’s forthcoming book, “Peril.”

The two veteran Washington Post reporters offer dramatic new details about Trump’s frantic effort to overturn the results of the 2020 presidential election and stay in power.

Gen. Mark Milley, the chairman of the Joint Chiefs of Staff, took the unprecedented action of ordering other top generals to consult him before implementing any significant orders by Trump following the storming of the Capitol on Jan. 6.

The revelations about Milley’s actions were first reported by CNN.

“There’s no telling what he could do. You know he’s crazy. He’s been crazy for a long time,” House Speaker Nancy Pelosi told Milley during a frantic Jan. 8 call about Trump’s mental standing.

“I agree with you on everything,” Milley responded, according to a transcript of the call.

Milley also called his Chinese counterpart Gen. Li Zuocheng twice to reassure him that there was no danger of a strike or other unpredictable military action in Trump’s final days in office.

“We are 100% steady. Everything’s fine,” Milley told Gen. Li. "But democracy can be sloppy sometimes.”

It includes new details about Trump’s effort to bully Vice President Mike Pence into blocking Congress from certifying the election of President Joe Biden in what is supposed to be a ceremonial action on Jan. 6.

The book reports that the mercurial Trump lost his temper during a last-ditch effort on the night of Jan. 5 to convince Pence to take his side, and the vice president insisted that he had a constitutional obligation to preside over Congress.

Despite the anticipation, it’s possible Californians will not know the outcome...Read More

Faced with a surge of delta-variant COVID-19 cases, especially in areas with low vaccination rates, President Joe Biden spoke and moved with great clarity of purpose in mandating vaccines for federal employees and ...Read More

Growing up in the 1960s, I was introduced to “Bizarro World” by DC Comics. Bizarro World was featured in comic books (now graciously re-named “graphic novels”) as a planet where everything and everybody is inverted...Read More