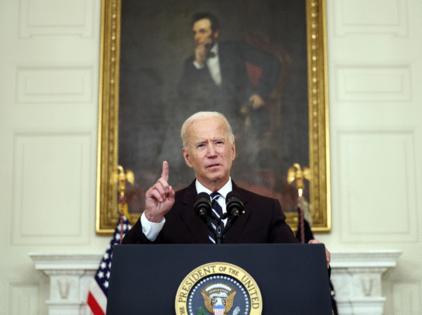 WASHINGTON — Less than an hour before President Joe Biden announced an ambitious plan to require many businesses to ensure full vaccination or require weekly COVID-19 testing of employees, Florida’s Republican Gov. Ron DeSantis had already vowed to fight it.

“I can say the one thing that I’m concerned about is them trying to force mandates on individuals and businesses,” said DeSantis on Thursday afternoon in response to questions during a press conference in Pasco County.

“I just think that that’s fundamentally wrong, and I think that the more and more this has become coercive, where people have threatened mandates and firing and business consequences ... the more people it alienates,” he added.

He intensified his message on Friday, calling Biden’s proposal unconstitutional and saying the president is doubling down on COVID-19 policies that have so far not worked against the disease. “The problem I have with Joe Biden more than anything, this guy doesn’t take responsibility for anything. He’s always trying to blame other people, blame other states,” said DeSantis during a press conference.

DeSantis, who has previously sparred with Biden over mask mandates in schools, is just one of a growing list of Republican state officials who are pledging to take action against the latest federal measure intended to curb COVID-19 deaths and infections. While Biden did not name DeSantis or any other official, he made it clear he is targeting governors who have so far refused to implement stricter requirements for the unvaccinated.

The latest proposed measure, which the Department of Labor’s Occupational Safety and Health Administration has still not released in full, would require businesses with more than 100 employees to confirm all of their workers are fully vaccinated, or otherwise require them to submit to weekly COVID-19 tests. Biden said he is also requiring businesses of this size to provide paid time off for their employees so they can get the vaccine.

Federal contractors and healthcare facilities that participate in Medicaid and Medicare will face even stricter requirements of mandatory vaccinations.

GOP state officials around the country are already preparing to challenge the proposed rule in what is shaping up to be the latest battle over pandemic politics. While DeSantis’ office did not say exactly what type of action it might take to fight the new rule, Florida Attorney General Ashley Moody tweeted on Friday that Biden “does not have the legal authority to force vaccines on millions of Americans’‘ and said her office would take “any and all action” possible to stop it.

“Have at it,” Biden said Friday in response to a question about possible legal challenges from state-level Republicans.