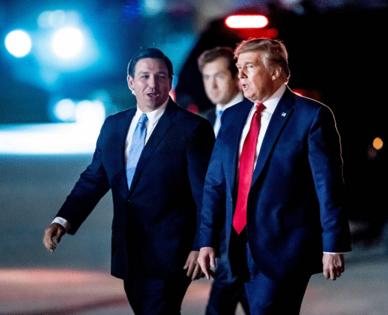 TAMPA, Fla. — Donald Trump has already suggested that if he runs for the White House again, he could look within his adopted home state of Florida for his next running mate.

But if the former president wants Gov. Ron DeSantis on the ticket in 2024, he might have to give up his Florida address, thanks to a rarely invoked provision in the U.S. Constitution that frowns on a party nominating a president and vice president from the same state.

The 12th Amendment to the nation’s guiding document sends a straightforward message to the Electoral College on how to choose the country’s next leaders. It states: “The Electors shall meet in their respective states and vote by ballot for President and Vice-President, one of whom, at least, shall not be an inhabitant of the same state with themselves.”

In layman’s terms, it means that Florida cannot vote for both a president and vice president who are Floridians.

The constitutional quirk has not received much attention in all the speculation about Trump’s future political aspirations and DeSantis’ viability as his No. 2. It certainly hasn’t stopped conservatives from dreaming of Trump joining forces with DeSantis, whose popularity among Republicans has soared in the past year. Trump-DeSantis 2024 apparel is already for sale at independent online stores.

Nevertheless, the 12th Amendment is a potentially complicating factor in what would be one of the most consequential decisions Trump would make if he waged another presidential campaign. And constitutional experts are in agreement that there’s no getting around it, unless Trump decides to give up his Florida residency.

“Whether or not the requirement that you vote for someone other than someone from your state makes sense today, and it probably doesn’t, the text is clear,” said Vikram Amar, dean of the University of Illinois College of Law and a professor of constitutional law. “It’s pretty anachronistic, but there it is, part of the text.”

The provision is a throwback to the early days of the republic, when the country’s leaders were wary that the American government — still mostly a collection of independently governed states — could cede too much authority to one state, said Robert William Bennett, a Northwestern University law professor and author of “Taming the Electoral College.”

Some in the past have misinterpreted the 12th Amendment to mean that the country cannot elect a president and vice president from the same state, which is not the case.

The issue came up during the 2016 Republican presidential primary. With former Gov. Jeb Bush and Sen. Marco Rubio both seeking the nomination, some wondered if they might eventually run together. MSNBC host Lawrence O’Donnell erroneously told his viewers in April 2015 that Bush-Rubio (or Rubio-Bush) couldn’t happen because they’re both from Florida, a remark that the independent fact-checking website PolitiFact deemed to be false.