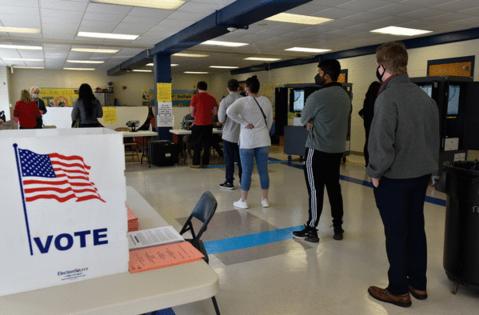 Republican lawmakers this year passed an unprecedented bevy of bills targeting the authority of state and local election officials, a power grab that might allow partisan legislators to overturn future election results by claiming there was fraud.

GOP legislators in at least 14 states have enacted 23 new laws that empower state officials to take control of county election boards, strip secretaries of state of their executive authority, or make local election officials criminally or financially liable for even technical errors, according to Protect Democracy, a left-leaning Washington, D.C.-based voting rights nonprofit.

Secretaries of state and county election officials around the country, many of them Republican, resisted pressure from former President Donald Trump and his allies to decertify the November 2020 results and reject huge swaths of mail-in ballots to turn the presidential election in his favor. Eight months later, there is growing concern among those officials that these new laws may cut a path for successful efforts in the future.

“Some elected officials didn’t like the results, so they’re trying to rewrite the rules,” said Colorado Secretary of State Jena Griswold, who chairs the Democratic Association of Secretaries of State. “This is a breakdown of what it means to live in the United States. It’s an attack on the democracy. It’s an attack on the idea that Americans get to choose their elected officials.”

Trump, without evidence, continues to falsely assert that widespread fraud cost him reelection. Election security experts and top national security officials have said voter fraud is rare and that the last election was the most secure in U.S. history. Nevertheless, GOP lawmakers say their changes are necessary to protect the integrity of future elections.

“What is to the left suppression, to the right is security,” said Arizona state Rep. John Kavanagh, a Republican. “We think ballots that go to voters who long ago died or moved increases the potential for voter fraud. For every person that votes fraudulently, they’re suppressing the vote of those who vote legally.”

After President Joe Biden won Arizona and Georgia in November, flipping two dependably Republican states, they became epicenters in the fight over ballot access and election powers. Republican lawmakers in Arizona and Georgia and other states, such as Iowa and Texas, have tirelessly sought to limit access to early and mail-in voting and shift election oversight to legislatures.

Arizona Republican legislators inserted a provision into this year’s state budget that stripped Democratic Secretary of State Katie Hobbs of her power to represent the state in election lawsuits.

“She has a history of not performing her duty to defend state law, but to enter into settlement agreements for laws she didn’t like,” said Kavanagh, who chairs the House Government and Elections Committee. “That’s not her job, so we’re going to put this in the hands of the attorney general.”