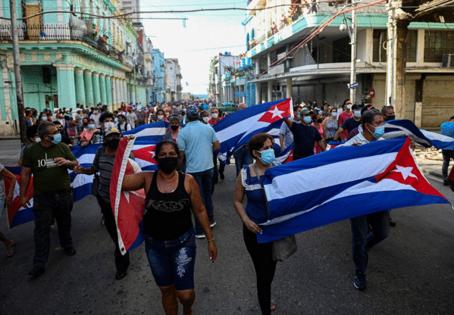 WASHINGTON — U.S. officials Monday pledged to “stand firmly” with Cubans who have unleashed a rare, robust wave of protest and called on the Havana government to refrain from a violent crackdown, even as authorities there shut down the internet and deployed counter-demonstrators into the streets.

“The Cuban people are demanding their freedom from an authoritarian regime,” President Joe Biden said, deeming it a “clarion call” for liberty. “I don’t think we’ve seen anything like these protests in a long, long time, if, quite frankly, ever.”

Speaking at the White House, he called on Cuban authorities to “hear their people and serve their needs.”

Biden and other U.S. officials, however, avoided accepting any responsibility for the dire conditions that so plague Cuban residents and deflected criticism for the administration’s slow process in the promised defrosting of the U.S. relationship with Cuba.

In the early days of his administration, Biden and his advisers said they would begin to relax some of the harsh measures imposed by former President Donald Trump, who in turn was reversing an opening overseen by his predecessor, former President Barack Obama.

Obama had reestablished a U.S. Embassy in Havana, allowed travel and trade and made the first trip to the island by an American president in nearly 90 years.

The Biden team, while not planning a full return to the Obama era, pledged to revive travel between the U.S. and Cuba and make it easier for Cuban Americans to send desperately needed remittances to their relatives on the island.

Nearly six months later, that has not happened. Secretary of State Antony J. Blinken reiterated Monday that a “policy review” continues, with focus on democracy and human rights on the island.

That sentiment was echoed by numerous people who advocate for closer ties between Washington and Havana.

“The Biden administration now owns the Trump policy of deprivation, the logic of which is to foment the shortages and street protests that we are witnessing in Cuba today,” Peter Kornbluh, a Latin America analyst and coauthor of “Back Channel to Cuba,” a book recounting Obama’s secret negotiations with Cuba, told the Los Angeles Times.

NEW YORK — Donald Trump’s lawsuit against the New York Times and his niece Mary Trump over an award-winning investigative report on his tax avoidance — for which she provided crucial documents — is just the former ...Read More

FORT LAUDERDALE, Fla. — A Republican state lawmaker has filed legislation that would create Texas-style abortion restrictions in Florida allowing anyone to sue abortion providers or any person who helps someone get an ...Read More

The top Republicans on congressional antitrust subcommittees are demanding documents from the Defense Department to investigate what they say is potential anticompetitive conduct related to a now-canceled $10 billion cloud...Read More

Senate Republican Leader Mitch McConnell believes the Republican Party is moving away from Trumpism and views the former president as a weight on his chances of reclaiming the majority next year.

That’s according to “...Read More