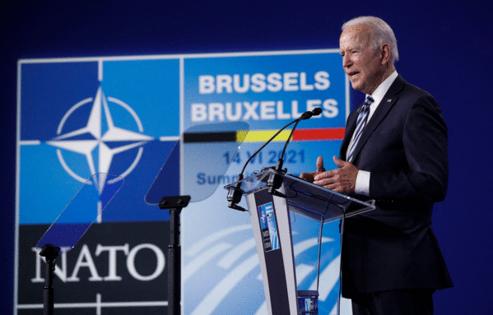 WASHINGTON — President Joe Biden said Monday he believed that the Republican Party had been “diminished” and “fractured” after the Trump presidency and that he was disappointed that Republicans fearful of political retaliation wouldn’t investigate the Jan. 6 U.S. Capitol riot.

Biden, speaking after a NATO summit in Brussels, said he doesn’t worry that allies could be skeptical of his commitments or unwilling to deal with the U.S. after Donald Trump’s time in office, during which the U.S. withdrew from a number of international agreements.

Yet the president expressed concern over the impact of what he called a “significant minority” of Americans who supported Trump on the larger politics.

Biden said he was disappointed with his former Senate colleagues who had voted against setting up a commission to investigate the Jan. 6 assault on the Capitol that occurred as the U.S. Congress was meeting to certify the results of the 2020 presidential election.

“It is disappointing that so many of my Republican colleagues in the Senate — who I know know better — have been reluctant to take on, for example, an investigation, because they’re worried about being primaried,” Biden said, referring to Trump’s threats to back challengers to any GOP officeholders he deemed disloyal.

Still, Biden said he believed Trump’s political moment was “passing” — even if it wouldn’t “easily” resolve.

“I think you’re going to see that, God willing, we’re going to make progress and there’s going to be a coalescing of Republicans, particularly young Republicans, who are coming up in the party,” Biden said.

And the president expressed optimism that allies and partners around the world would continue to work with the U.S., saying he believed by rejecting “overwhelming hyperbole” and speaking plainly he would be able to convince foreign leaders that the U.S. can be trusted.

“I think that they have seen things happen — as we have — that shocked them and surprised them that could have happened, but I think they — like I do — believe the American people are not going to sustain that kind of behavior,” he said.