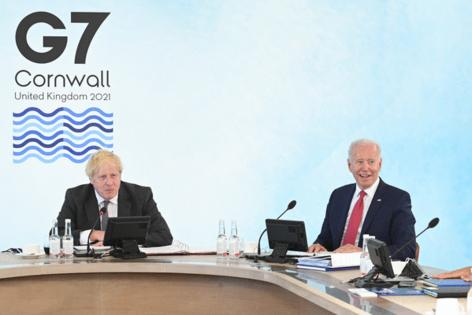 Presidents like to hang their foreign policies on one big concept, sometimes even one word.

And each president, at least since Woodrow Wilson, has tried to sell the country, and the world, on his big idea.

Jimmy Carter’s was human rights. Richard Nixon’s was detente — the historic “openings” to China and the then-USSR. Barack Obama’s was “leading from behind,” which, in retrospect, sounds even worse than it was.

President Joe Biden, who is on his first overseas trip, initially to meet with allies in Europe and then to sit down with Vladimir Putin in Switzerland, also has a big idea. And Biden clearly intends to build his foreign policy around it. The idea is that the world is now in a titanic, historic struggle between authoritarian regimes (like China, Russia, Turkey and others) and democracies (like the United States and the NATO nations, but particularly those we have a “special relationship” with, like Great Britain and Canada). Germany and France must be major players in the defense of democracies, too.

This is one grand theme of the Biden presidency and the major thread of his foreign policy: Open societies must prove they can govern and cohere at home and that they can stand up to bullies, stick together and compete in the world.

This is a solid big idea and maybe a sound organizing principle for action as well — one that addresses the world as it really is today and brings to bear some measure of idealism.

There are two subsidiary principles to the emerging Biden doctrine: One is that the United States, as the world’s greatest democracy, is “back” and willing to lead the democracies of the globe again, which is an implicit criticism not only of Donald Trump, but Obama as well. And the second is that strong alliances are the only way for democracies to prevail; we cannot go it alone. That is a direct refutation of the Trump foreign policy, which Biden regards as isolationist.

President Biden is two things: He is an internationalist and he is experienced in foreign policy, having been head of the Senate Foreign Relations Committee and having been vice president.

Internationalism is also a legitimate way to see the world.

But, it is also true that any president today needs more than one big idea to manage foreign policy. We need to be able to walk and chew gum at the same time.