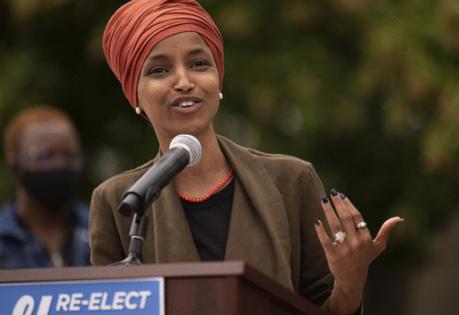 MINNEAPOLIS — U.S. Rep. Ilhan Omar said Thursday that she "was in no way equating terrorist organizations with democratic countries with well-established judicial systems," after her tweet earlier this week spurred harsh criticism from Republicans and prominent Jewish Democrats.

Hours before, the Minnesota Democrat publicly clashed with some members of her own party after a dozen House Democrats criticized the congresswoman, saying in a statement that "equating the United States and Israel to Hamas and the Taliban is as offensive as it is misguided." Republicans, long critical of Omar, also pushed House Speaker Nancy Pelosi to take action against the second-term lawmaker.

Omar has been a vocal critic of Israel's government and a prominent advocate for Palestinian human rights. Her strongly held views have put her at odds in key moments with Jewish Democrats such as Minnesota Rep. Dean Phillips, one of 12 lawmakers who signed on to the joint statement calling out Omar Wednesday night. The Democrats were publicly seeking clarification from Omar, which they later got, after they said "false equivalencies give cover to terrorist groups."

The criticism stemmed from Omar's tweet following a House Foreign Affairs Committee hearing on Monday. Omar shared video of her exchange with U.S. Secretary of State Antony Blinken, noting opposition by the United States to certain investigations by the International Criminal Court.

"We have seen unthinkable atrocities committed by the U.S., Hamas, Israel, Afghanistan, and the Taliban. I asked @SecBlinken where people are supposed to go for justice," Omar said in the tweet. Her spokesperson noted that in 2020 the court "opened an investigation into alleged crimes committed by both the Taliban and the United States in Afghanistan, as well as allegations against Hamas and Israel in the 2014 Gaza conflict in 2021."

Omar clarified her comments in a statement on Thursday: "To be clear: the conversation was about accountability for specific incidents regarding those ICC cases, not a moral comparison between Hamas and the Taliban and the U.S. and Israel."

But her Monday tweet set off a wave of GOP attacks led by the House GOP's campaign arm, the NRCC, chaired by Minnesota Rep. Tom Emmer. Republican House Leader Kevin McCarthy escalated the call for action against Omar before she released her clarification.

"Rep. Omar's anti-Semitic & anti-American comments are abhorrent," McCarthy tweeted. "Speaker Pelosi's continued failure to address the issues in her caucus sends a message to the world that Democrats are tolerant of anti-Semitism and sympathizing with terrorists."

After Omar's clarification, House Democratic leaders said they welcomed it and appeared to publicly use the development to try to calm the situation within the party. Pelosi and the House Democratic leadership team made clear however that "drawing false equivalencies between democracies like the U.S. and Israel and groups that engage in terrorism like Hamas and the Taliban foments prejudice and undermines progress toward a future of peace and security for all." The head of the Congressional Progressive Caucus, where Omar serves as whip, made a show of support for her later.

The situation also exposed a difference in tone among Minnesota's four House Democrats. Rep. Angie Craig, whose seat is seen as a potential GOP pickup opportunity in the 2022 midterms, said in a statement that "to equate the democracies of America and Israel to terrorist organizations is completely inappropriate and unacceptable."

WASHINGTON — The White House has reached an impasse with Sen. Joe Manchin, the centrist Democrat from conservative West Virginia who this week reiterated his opposition to key elements of the president’s legislative ...Read More

WASHINGTON — Rep. Ilhan Omar has once again stirred controversy among her Democratic colleagues over her characterization of Israel and the United States. Tensions rose within the Democratic ranks as a tweet from Omar ...Read More

After three years of marriage, my writer husband, Julius Lester, and I had worked out a good arrangement: He wrote in our grimy New York apartment, taught a few guitar students and cared for baby Rosa while I attended City...Read More