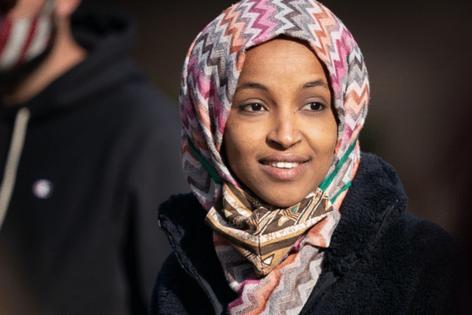 WASHINGTON — Rep. Ilhan Omar has once again stirred controversy among her Democratic colleagues over her characterization of Israel and the United States. Tensions rose within the Democratic ranks as a tweet from Omar prompted a letter of response from a group of Jewish colleagues in the House and a denunciation from Omar.

Earlier this week, the Minnesota Democrat tweeted about an exchange she had with Secretary of State Antony Blinken, where she pressed for an investigation into human rights abuses both by Hamas and Israeli security forces. But her tweet seemed to compare the United States and Israel to Hamas and the Taliban.

“We must have the same level of accountability and justice for all victims of crimes against humanity,” she wrote. “We have seen unthinkable atrocities committed by the U.S., Hamas, Israel, Afghanistan, and the Taliban.”

The comparison prompted strong criticism and pushback from a group of Jewish Democrats in the House, who issued a statement condemning her position and asking the Minnesota Democrat to “clarify her words” or issue an apology.

“Equating the United States and Israel to Hamas and the Taliban is as offensive as it is misguided. Ignoring the differences between democracies governed by the rule of law and contemptible organizations that engage in terrorism at best discredits one's intended argument and at worst reflects deep-seated prejudice,” said the group of 12 House Democrats, led by Illinois’ Brad Schneider.

“The United States and Israel are imperfect and, like all democracies, at times deserving of critique, but false equivalencies give cover to terrorist groups. We urge Congresswoman Omar to clarify her words placing the US and Israel in the same category as Hamas and the Taliban,” the statement continued.

The House Democratic caucus has been roiled before by Omar’s statements. In 2019, she suggested that pro-Israel advocates held “allegiance” to Israel, which several Democrats said brought up painful pervasive tropes of American Jews having “dual loyalties.”

Some of her comments shortly after arriving in Congress sparked allegations of antisemitism and triggered a debate over whether Democrats should move a resolution on the House floor to punish her.

In a tweet early Thursday morning, Omar called her fellow House Democrats’ reaction “shameful” and said the group of critics failed to call her before releasing their statement.

“The constant harassment & silencing from the signers of this letter is unbearable,” Omar tweeted, calling out what she described as “Islamophohobic tropes” in their statement. “It’s shameful for colleagues who call me when they need my support to now put out a statement asking for ‘clarification' and not just call.”

After three years of marriage, my writer husband, Julius Lester, and I had worked out a good arrangement: He wrote in our grimy New York apartment, taught a few guitar students and cared for baby Rosa while I attended City...Read More