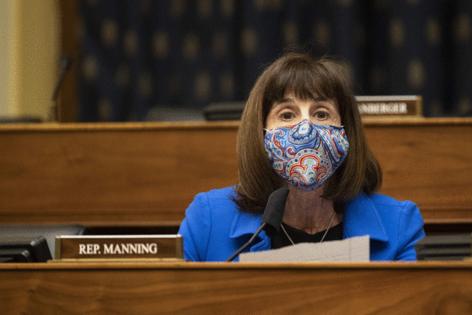 As her frustration increased, she called up a friend, another immigration lawyer with whom she shared office space when running her solo firm in Greensboro, North Carolina.

Now the freshman Democrat is the one talking about immigration, standing out as one of the few congressional members with substantial experience practicing immigration law.

In a recent video interview with CQ Roll Call, Manning speaks easily about the slew of work visas available, such as O visas for those with extraordinary abilities and L visas for internal company transfers.

She’s quick to describe her vision for the U.S. immigration system, which includes increasing the number of H-1B visas available for high-skilled workers, and making it easier for foreign-born medical professionals and foreign citizens with degrees from U.S. schools to work here.

“We do want to be making sure that our kids, our students know that there are great careers in the STEM areas, and give them great opportunities to get the skills and knowledge to go into those fields,” she says. “But in the meantime, we’ve got a lot of open jobs that companies can’t fill, and we’ve got to fill those positions with top quality people if we’re going to be competitive.”

Manning comes to Congress as it considers landmark immigration legislation. Among the proposals are narrower bills that would create a path to citizenship for smaller portions of the undocumented population, like those brought to the U.S. as children, as well as White House-backed legislation to overhaul the whole system.

While Congress is filled with lawyers — roughly 40% have a law degree, according to the American Bar Association — she is one of just a handful of members who practiced immigration law, revealing a gap in expertise on one of the most hot-button issues of the session.