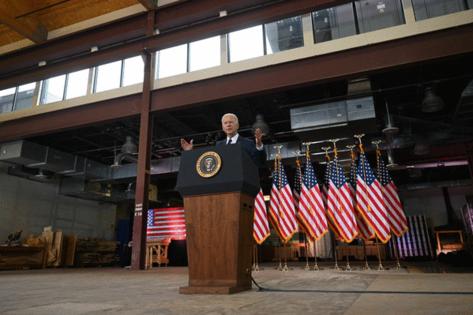 WASHINGTON — President Joe Biden is making his first stop in a red state to pitch his multitrillion-dollar infrastructure and jobs proposal, heading to Louisiana on Thursday as he seeks to redefine more broadly what it means to win bipartisan support.

With congressional Republicans largely united against his plans, Biden is reaching beyond them to voters for backing. He’s scheduled to visit Lake Charles, in the state’s southwest corner, and New Orleans to talk about federal investments in water projects — a potentially popular idea in a coastal state increasingly threatened with inundation spurred by climate change.

A reminder of the problem arrived a day before Biden’s visit: Heavy rains led to flash flood warnings in New Orleans. He plans to tour one of the the city’s aging and troubled facilities that houses water purification equipment and turbines for drainage pumps. Administration officials estimate that fixing Louisiana’s water infrastructure would cost $7 billion over two decades.

Despite the lack of support from elected Republicans, Biden’s plans are broadly popular with the public. Two out of three Americans support the infrastructure proposal, according to polls released by Monmouth University and The New York Times last month. However, only one-third of Republicans backed the plan in those polls.

Senate Minority Leader Mitch McConnell, R-Ky., signaled Wednesday that he would dig in his heels in Congress. “One hundred percent of my focus is on stopping this new administration,” he said during an event in his home state.

Biden brushed off the comment when reporters at the White House asked about it, recalling that McConnell said something similar when former President Barack Obama was in office yet “I was able to get a lot done with him.”

“I’m willing to compromise,” Biden said, but “I’m not willing to deficit-spend.” He blamed Republicans for putting the nation "$2 trillion in the hole” because of tax cuts that disproportionately benefited the wealthy and didn’t produce the promised economic growth to offset their costs.

In traveling to Louisiana to make his case, Biden will be in a place that has been a Republican stronghold in presidential and recent Senate elections. But the state has a Democratic governor, John Bel Edwards, who said he’s looking forward to welcoming Biden.

“We have billions of dollars in backlogged infrastructure projects in Louisiana, and I am thankful for federal support to tackle these challenges, create jobs and improve life for our people,” Edwards tweeted.

Brian Brox, a political science professor at Tulane University in New Orleans, said Biden’s pitch could receive a tepid response, particularly in Lake Charles, which is home to refineries, pipelines and petrochemical plants. Biden has pledged that the transition to clean energy to combat climate change will generate new jobs, but doubters abound in such areas where the oil and gas industry remains what Brox called “a way of life.”

“It’s not terribly persuasive,” he said. “These are people who are very rooted to the existing economic arrangements.”

Congressional Republicans have lined up to oppose Biden’s proposed $2.25 trillion in spending over a decade, both because of its cost and because it would be paid for with higher taxes on corporations. Some have offered a far smaller package focused on roads, bridges, broadband access and drinking water improvements. They put the cost at $568 billion, but much of that reflects money that the federal budget already projects for such infrastructure expenditures, while Biden is calling for new spending.

Sen. Shelley Moore Capito, R-W.Va., who is playing a key role in negotiations with the White House, recently said she had a “constructive” conversation with Biden in which they “expressed our mutual desire to work together.”

Biden previously visited Texas in the wake of a deadly winter storm and Ohio to mark the 10th anniversary of the Affordable Care Act becoming law. But most of his travels have focused on swing states like Georgia and Pennsylvania, where he beat former President Donald Trump.