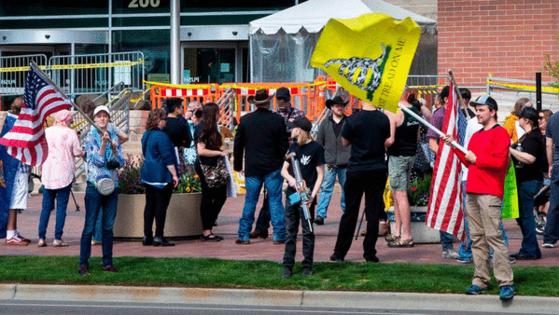 Since that poll was conducted, tensions have not abated much. There have been fewer protests outside of officials’ homes since the end of COVID restrictions, but the far-right has moved to other venues.

Recently, Sen. Chris Trakel, R-Caldwell, made hysterical claims, shouted down board members and failed to conduct himself according to rules of order at a meeting of the Caldwell school board.

The Caldwell school board again had to delay any consideration of the policy because it needed time to coordinate the meeting with police. Trakel behaved like a bully, abused his authority and was rewarded for it with an interview on Fox News.

And last week on a far-right website, Ammon Bundy issued a thinly veiled threat of violence, addressed directly to Idaho State Police, the lieutenant governor, prosecutors, the CEO of St. Luke’s, a judge, a local attorney, the governor and the head of the Department of Administration.

This situation cannot be allowed to persist. It stems from a failure of accountability, and it is having sweeping consequences.

In his State of the Judiciary address this year, Chief Justice Richard Bevan said it was increasingly difficult to recruit judges because of worries they will face violence for doing their jobs.

Legislative leaders were far too lax when Bundy’s allies shattered doors in the Idaho Capitol, where they were denied entry due to COVID restrictions. Instead of enforcing the rule of law, lawmakers caved to pressure and allowed them to remain in the gallery — rewarding their behavior.

The only reason things reached that was a prior failure by federal prosecutors to hold Bundy accountable for his participation in two armed standoffs.

This is one reason it’s important to have prosecutors and law enforcement with integrity. Bundy isn’t in federal prison today because the charges stemming from the Bunkerville, Nevada, standoff were thrown out due to “outrageous” prosecutorial misconduct. For years now, Idaho has had to deal with the consequences of that misconduct.

Instead of being in a federal correctional institution, Bundy is a fixture of far-right politics in Idaho; he was endorsed by the Idaho Freedom Foundation and got about one in six votes for governor.

“I pray every day to my Father in Heaven for the resolve to remain peaceful, but feel I have the justification to call upon my friends and defend myself by any means, even though I have no intention at this point to do so,” Bundy wrote in his recent op-ed.

That’s what he says this month. Last month, he was threatening to meet anyone who tried to take his home as a result of a court judgment against him “on the front door with my, you know, friends and a shotgun.”

And Bundy issued a further threat.

“... If they smite me or my family a third time I should bear it patiently as a testimony against them, but warn them, in the name of Jesus Christ, that they come no more upon me or my family, and if they do so, God will deliver them into my hands,” Bundy wrote.

There needs to be a serious effort to get out ahead of far-right violence, an effort to reinstitute the belief that we are a society governed by the rule of law. It needs to be conducted with integrity. If things are allowed to fester as they have, it is only a matter of time before something tragic happens.