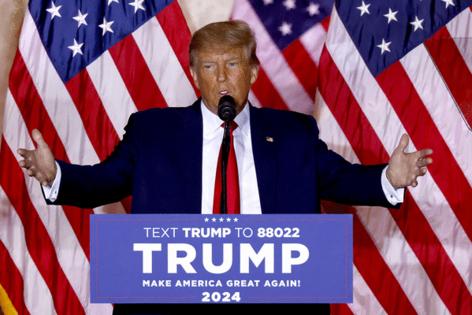 The contest is now in full flight, even though only one candidate, Trump, has formally announced. In echoes of 2016, political observers have been debating whether Trump could capture the nomination with a relatively small share of the overall vote.

Indeed, it appears that the Trump campaign may be counting on securing the nomination in exactly that way — winning pluralities while other Republican candidates split the anti-Trump vote.

It wouldn’t be impossible. After all, something like this happened in 2016. But since the modern era of presidential nominations began in 1972, with winners determined by primaries and caucuses rather than national conventions, candidates who relied on that formula have rarely come up the winner.

There are essentially three ways presidential nomination battles can be settled these days:

— At an early point in the process — perhaps even before the first events in Iowa and New Hampshire — the vast majority of party actors converge on a candidate. And because they control important resources that matter in primary elections, their decision essentially determines the nominee. This is what happens in most presidential nomination cycles, including for Mitt Romney in 2012, Hillary Clinton in 2016 and Joe Biden in 2020.

— The voters themselves are strongly sold on a candidate and the party goes along. This is often what occurs when an incumbent president is running for reelection. George W. Bush in 2004, Barack Obama in 2012 and Donald Trump in 2020 were all extremely popular with their party’s voters. Even if party professionals didn’t share that enthusiasm (though they probably did in at least the first two of those cases), the voters themselves might not have been open to other options.

— A factional candidate with limited political party backing snags the nomination because he or she has enough support to gain a plurality of the vote against divided opposition, and the party eventually accepts it rather than risking chaos by fighting through to the convention. This has happened three times in recent decades, with Democrats George McGovern in 1972 and Jimmy Carter in 1976 and Republican Donald Trump in 2016.

Dozens of factional candidates have actually tried to win nominations in that third way — most recently Vermont Sen. Bernie Sanders, whose campaign chose not to reach out beyond his strongest supporters partly because they thought they could win the nomination with a third of the primary vote. They were spectacularly wrong.

Why exactly Trump was able to succeed in 2016 when so many other factional candidates have failed is a complicated question that has divided political professionals. Some point to the extraordinary focus on him by CNN and other “neutral” media. Others suggest efforts by Republican-aligned media to advocate for other candidates played a role. Other factors that might have mattered: dysfunction within the Republican Party, and especially a general antipathy toward compromise; and just plain luck, given that Trump’s margin of victory was small and depended on a long list of events going just the right way.

In 2020, by contrast, Trump won the usual way, with the overwhelming support of both the party and its voters. His campaign succeeded in reaching out to almost the entire party. He ran for renomination, that is, as a coalition-style candidate, beloved by some but attempting to be acceptable to (almost) all — for example, by signing off on Republican tax legislation and by nominating standard-issue Republican judges. That isn’t how he is acting now.

But for Trump to win anew as a factional, plurality candidate, he would probably need the field to once again winnow slowly, as it did in 2016, and to have the good fortune to have no one broadly tolerable to most of the party remain as a viable rival. That’s a pretty small needle to thread.

The other avenues aren’t necessarily closed to him (or to some of the other candidates). Just because many Republicans wanted nothing to do with Trump ’16 doesn’t mean they will feel that way in 2024. He is a much different candidate — one who has repeatedly proved that he will go along with most of the party’s agenda and policy priorities, but also one who turned out to be autocratic and an opponent of democracy. The party itself could be very different than it was then.

And whatever the polls say now, it’s possible that Republican voters will insist upon the same two-time nominee they have supported in the past.

For the moment, there isn’t much evidence that Trump has deep support among Republican decision-makers or with voters more broadly. Indeed, the perception that he is vulnerable is partly why several Republicans are campaigning for 2024, even if most of them are avoiding direct confrontations with Trump most of the time. For any front-runner, drawing multiple opponents at this stage has to be a sign of significant weakness. Given a front-runner known for carrying grudges, it’s an even stronger sign, since the other candidates are risking the possibility of being enemies of the White House if Trump winds up there again.

It doesn’t mean Trump won’t be the nominee. The same party that is struggling to pick a speaker of the House might turn out to be unusually incapable of coming to an agreement on a presidential nominee, leaving the field wide open for a factional candidate to prevail again. But if Trump isn’t acceptable to many party figures and doesn’t have strong loyalty from party voters, there is no guarantee that even if a factional candidate wins, it would be him.