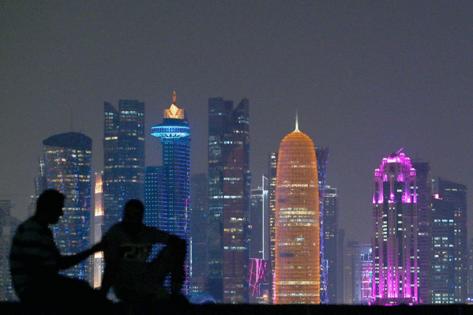 The global financial crisis of 2008 dealt a blow to thousands of Indian laborers. They were set to join hundreds of thousands of compatriots providing the workforce for a construction boom in Dubai. Then the world economy spasmed, the price of oil tanked and international finance dried up. Hundreds of construction projects across the United Arab Emirates stalled. And the workers were left stranded at home, work permits in hand.

Three years later, survey teams deployed across India to interview thousands of these workers, many who managed to get to jobs in the UAE just before the crisis hit and others who drew the short straw: Hired by the same construction company just a few months later, they never left India and had to settle for a local job.

Their lives took very different paths: Those who shipped out to the Gulf, researchers found, earned four times as much as those who stayed, a gain on par with the wage gap between a university-educated worker and an illiterate laborer in India.

The World Cup in Qatar has drawn the spotlight onto the plight of its migrant workers – 2.2 million of them in 2020, according to statistics from the United Nations. That is 50% more than a decade earlier, when Qatar won the rights to host the tournament. Nearly 80% of them come from Bangladesh, India, Nepal, Pakistan, the Philippines and Sri Lanka.

Human rights organizations have come down hard on FIFA for not doing more to guarantee the rights of these desperately poor laborers who built the gleaming stadia where the matches are being played. They protest exploitative work, rampant wage theft and high death rates, as well as the lack of unions and the use of coercive contracts that tie migrants to a single employer.

And yet Qatar’s minimum wage ranges from four to eight times that in India. Much like the Indian workers who made it to Dubai before the global financial crisis slammed the door shut, the laborers that got jobs building Doha’s stadia are the lucky ones.

“It is a life-transforming amount of money,” said Michael Clemens of the Center for Global Development, who led the research on Indians in the UAE. “It can mean the difference between life and death for a family member who gets sick, between opening a business and not opening a business, between getting off the farm or staying on the farm permanently.”

Migrant work in places like Doha, Dubai and beyond is, in fact, the most powerful tool the world knows to reduce poverty. As Glenn Weyl, a research economist at Microsoft who teaches at Yale, noted in a paper for the “Normative Ethics and Welfare Economics” conference at the University of Chicago several years back, migrant work in the Persian Gulf does more to reduce global inequality than the combined welfare states of the rich world.

“If the OECD countries adopted policies similar to Qatar’s,” Weyl wrote, “such adoption would likely exhaust the supply of poor migrants globally and thus essentially not just eliminate global absolute poverty, but also elevate nearly all individuals outside the global middle class into this group.”

The benefits of migrant work cannot be ignored. A study by economists at the World Bank and Yale University of a lottery in Bangladesh to allocate visas for migrant work in Malaysia’s palm oil plantations found that remittances doubled the income of winner households in Bangladesh, compared with loser households. It increased their consumption and their investments in land and housing. They were less indebted and had lower poverty rates.

There is, of course, a legitimate fight to be had to ensure that wages are not stolen and working conditions are humane.

Acknowledging the potential for abuses, governments in some countries have gotten involved in managing the process. For instance, the Bangladeshi lottery was put in place by the governments of Malaysia and Bangladesh to end recruitment malpractices. The program reduced intermediation fees to $400 per migrant, from the $3,000-$4,000 that private recruiters used to charge.

New Zealand’s Recognized Seasonal Employer scheme, an agricultural guest-work program for nationals of poor South Pacific island countries, raised the household incomes of poor families in Tonga typically by a factor of ten and increased child schooling and Tongans’ self-reported standard of living. A study by researchers at the World Bank placed it “among the most effective development policies evaluated to date.”

Critics of the conditions migrant workers toil in – who often seem to deem cheap migrant work in rich countries as inherently exploitative and wrong – too often lose sight of a critical question: What is the counterfactual?

Take, for instance, the tragic reports of deaths of immigrant construction workers in the construction sites across Qatar. These reports rarely consider the alternatives these workers have.

Maheshwor Shreshta of the World Bank estimated, for instance, that the two-year mortality of Nepali migrant workers in Malaysia and the Persian Gulf countries was 1.3 per thousand. The mortality rate of average Nepali men with the same age distribution was more than three times higher: 4.7 per thousand.

The critique of the “exploitation of desperate migrants” often assumes that their decision to migrate is based on misinformation and fraud. It may seem like a good idea, but the outcome will inevitably be horrible. One could also make the contrary case, though.

In fact, the flood of outrage and criticism from many developed country NGOs and pundits about the dangers of migrant work might prevent prospective migrants in the world’s poorest countries from taking a step that might drastically improve their lives.

“National and international media have given considerable attention to the numbers of Nepali workers who die abroad, and to the exploitative conditions they work under,” Shreshta wrote. “This focus could give potential migrants a misleading impression of mortality rates.”

In one field experiment with Nepali workers, Shreshta found that inexperienced prospective migrants overstated the mortality risk of migration by seven times. And many still wanted to go. If you faced their choices, chances are that you would as well.

Eduardo Porter is a Bloomberg Opinion columnist covering Latin America, US economic policy and immigration. He is the author of "American Poison: How Racial Hostility Destroyed Our Promise" and "The Price of Everything: Finding Method in the Madness of What Things Cost."