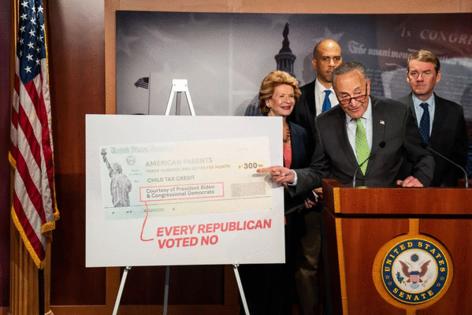 For a six-month period last year, something life-changing happened for tens of millions of American families: They started receiving automatic monthly payments of as much as $300 per child to use for whatever they needed.

But Congress allowed the payments to expire in January, ending an expanded child tax credit that slashed child poverty and could have been a source of financial stability as inflation makes almost everything more expensive.

Lawmakers now have the opportunity to correct that mistake, by acting during Congress’ lame-duck session to revive this pro-family policy.

The effects of these benefits, which began in July 2021, were swift and dramatic. The child poverty rate fell nearly in half, from 9.7% in 2020 to 5.2% in 2021, and food insecurity plummeted, as families used the money to cover essentials such as groceries, rent, utility bills and child care.

But those gains faded quickly once the payments ended and families felt the hit of financial hardship almost immediately. There were 3.7 million more children in poverty in January 2022 than in December 2021. By February, more households with children reported having difficulty covering their expenses. By July, food insecurity had jumped back up too.

Democrats in Congress are pushing to include the enhanced child tax credit in an end-of-the-year package of legislation, and it’s important that they act now, before the GOP takes control of the House. When the child tax credit was expanded in 2021, it was part of the American Rescue Plan pandemic relief bill that passed without a single Republican vote.

Keeping families with children out of poverty should not be a partisan issue. Republicans have supported expanding the child tax credit in the past, and some, including Sen. Mitt Romney (R-Utah), have proposed their own plans for monthly payments. The idea should be even easier to sell now because it is no longer theoretical. It’s a proven policy that made life better for more than 60 million children, if only for a few months.

Democratic lawmakers have proposed pairing the enhanced child tax credit with a corporate tax break that would undo a provision of the 2017 tax law signed by President Trump restricting the use of credits for research and development expenses that has been a focus of complaints from business leaders. One group of Democrats opposes the inclusion of any corporate tax breaks unless the child tax credit is reinstated. This is a righteous demand, and it should be at the top of both parties’ agenda for the lame-duck session.

It’s likely that any bipartisan deal that emerges will include changes to restrict eligibility to target mostly low-income families or add a work requirement. But there is value in keeping the credit as expansive as possible, as a near-universal benefit to families with children. Children shouldn’t be the victims of their families’ financial circumstances that can change overnight with the loss of a job, housing, a caregiver, or any number of other reasons.

There may also be debate over how to offset the roughly $100 billion annual cost of expanding the child tax credit. But it should be stressed that investing in our children pays dividends, generating about eight times as much in benefits to society, through improved health, increased future earnings and reduced reliance on other government benefits such as food stamps.

Predictable monthly payments are so powerful because they leave it to families to decide how the money would best be spent. Families know best and Congress should empower them to make those decisions once again.