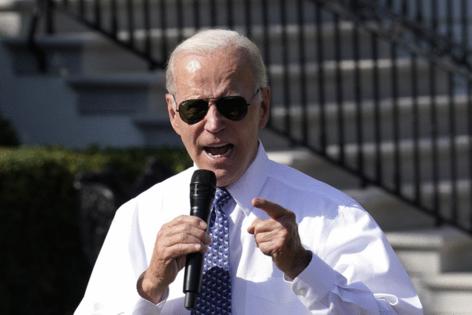 President Joe Biden says the Inflation Reduction Act, which contains some $370 billion in climate spending, represents the most sweeping government investment in clean energy “ever, ever, ever.” To ensure that investment is worthwhile, he’ll need an equally unprecedented overhaul of federal rules and regulations. Congress should make such reforms a top priority.

Building anything in the U.S. requires navigating a rainforest of red tape. A primary impediment is the National Environmental Policy Act, which requires federally funded projects to undergo a laborious environmental-review process. Mandated impact studies can run for hundreds of pages, cost millions of dollars and take years to complete. Faced with such costly busywork, many projects don’t get off the ground at all. Others endure seemingly endless legal challenges.

Green-energy projects have been no exception. Wind, hydropower, geothermal, solar, nuclear: However desirable such endeavors may be — even to the government itself — they’re no match for the sheer obstructive power of state and federal rulebooks. Permitting now takes nearly three years on average for renewables projects, while preparation time for impact statements rose by more than 50% between 2000 and 2018. Uncertainty inherent to this process imposes untold additional costs.

Without change, this system could well thwart Biden’s climate goals. By one estimate, the funding in the IRA and last year’s infrastructure bill should be enough to reduce U.S. emissions to 42% below 2005 levels, near the president’s goal of a 50% reduction by 2030. Yet green-energy companies argue — persuasively — that these objectives aren’t possible without permitting reform. As just one example: High-voltage transmission capacity will need to increase by about 60% by 2030. Under current rules, such a build-out could easily take twice that long.

Give credit to West Virginia Sen. Joe Manchin, then, for making permitting reform a priority. Last summer, as haggling over the IRA intensified, Manchin offered Democratic leaders a deal: He’d vote for their big spending splurge in exchange for a pledge to revisit the permitting issue down the road. The two sides agreed and Manchin duly offered his proposal as part of a continuing resolution in September.

Among other things, the plan would’ve imposed time limits on environmental assessments, established a list of projects of “strategic national importance” for priority review, and given the federal government more power over permitting transmission lines. (Not incidentally: It also would’ve speeded approval of a natural-gas pipeline that crosses through West Virginia.) After a showdown with Senate Republicans, the package quickly died.

Even so, both Biden and Republican leaders say a permitting-reform measure of some kind remains a priority. By fixing some of the flaws in Manchin’s proposal, they should be able to make a deal.

As a start, any such deal should scrap the idea of time limits; perversely, truncated reviews can actually lead to worse delays by encouraging more lawsuits. Instead, Congress should make it harder to tie up projects with dubious legal proceedings. In particular, it should shorten the statute of limitations for such suits, enhance the requirements for standing in litigation, and limit the ability of courts to issue injunctions on projects that have already undergone significant environmental review.

Next, a clean-energy economy will be heavily reliant on expanding transmission capacity. Yet new power lines are all too easily obstructed by parochial state and local interests. The best bet is for Congress to pass some version of the SITE Act, which would empower a single federal regulator to oversee big interstate transmission projects in the national interest.

Across federal agencies, finally, new efforts are needed to maximize exemptions, speed reviews and otherwise prioritize clean-energy projects, an undertaking that above all demands leadership. Elected officials are quick to call climate change an “existential threat.” They should show a little more urgency.